Forage brassica crops are a valuable source of feed for many farm types, but can be significantly damaged by insect pests both during and following establishment. The use of different management techniques can reduce the impact of some insect pests, but even under the best crop management practices insecticide treatments may still be required.

Grass grub is not usually a problem in spring, but in some areas where grass grub larvae have not achieved a high enough body weight over winter they may still be present. Options for control include cultivation, seed treatment and insecticide granules applied in the drill row.

Slugs are more likely to be a problem in direct drilled crops, especially under cool moist conditions and where there is surface trash for them to shelter under. Check paddocks prior to drilling by laying out slug mats, wet sacks, discs or boards, for one to three nights and count the slugs found in the morning. An average of three to four (or more) slugs per sack indicates there are sufficient numbers to cause crop damage.

It is best to apply slug baits, like Endure, prior to drilling to knockdown slugs before they can migrate into the drill rows. If there is a risk of slugs migrating into the drills rows, then it would be best to apply Endure Mini in the drill row alongside the seed. Even if slug numbers are low, or in cultivated situations, it is advisable to spread bait on the outside round to control slugs migrating in from the paddock margins. Endure can be broadcast with fertiliser prior to drilling, and the extruded pasta bait formulation will last for up to 21 days, even in wet weather. If it is not applied before drilling, then apply either at drilling or as soon as possible afterwards. Check for slug activity again three to four weeks after application.

Springtails can damage brassicas any time after germination and are often abundant when crops are established out of pasture. Symptoms are scalloping of the edges of cotyledons and leaves, or small pits or holes seen on the underside of leaves. Check for their presence by tapping around a white card or handkerchief placed on the ground. The springtails will jump when disturbed and can be seen on the white card.

Springtails can be controlled cost-effectively with an insecticide like Toppel 500, which is best applied either in the spray-out, just before or after drilling, or at crop emergence. Seed treatments or coatings can also be effective, but if populations are high there can still be some crop damage.

Nysius fly chew on the emerging shoots and stems of seedlings. This causes a cankerous growth that interferes with sap flow and weakens the stem, increasing the risk of ‘wind blow’. An insecticide like Toppel 500 is best applied either with the spray-out, just before or after drilling, or at crop emergence. Continue to monitor the crops in case there are later flights. Seed treatment can also be effective, but if populations are high there can still be some crop damage.

Cutworm can cause significant damage to forage brassicas. One of their characteristic habits is chewing off seedlings at ground level, causing more crop damage than what they can eat. It’s important to apply an insecticide either prior to drilling or as close as possible to crop emergence. Options include the synthetic pyrethroid, Halexcs or Toppel 500. Evening is the best time to spray because the caterpillars come out to feed at night, and also because insecticides are broken down more rapidly during hot, dry conditions.

Aphids can be vectors for virus, as well as causing yellowing, wilting, twisting and stunting of expanding leaves while severe infestations can reduce crop palatability. Applying insecticides before aphid numbers build up will help prevent virus spread and give better results. Toppel 500 can give a useful clean-up of aphids early in the crop, but it needs contact action, so if aphid pressure is high or the crop is at later stages, it’s better to use a translaminar or systemic product. To protect beneficial predators like ladybirds, it’s best to use a selective insecticide at later crop growth stages. See table 2 below for suitable options.

Leaf miner larvae burrow under the cuticle of brassica leaves, causing characteristic damage.  Damage is most commonly seen in turnips and is directly related to the leaf area affected. A translaminar or systemic insecticide is likely to be more effective.

Diamond back moth caterpillars can be found in the new leaves at the growing point and will chew holes in the leaves. When populations are high the plant can look like it has been shot with a shot gun. With warm weather populations can build up rapidly and it’s important to spray at early signs of infestation. 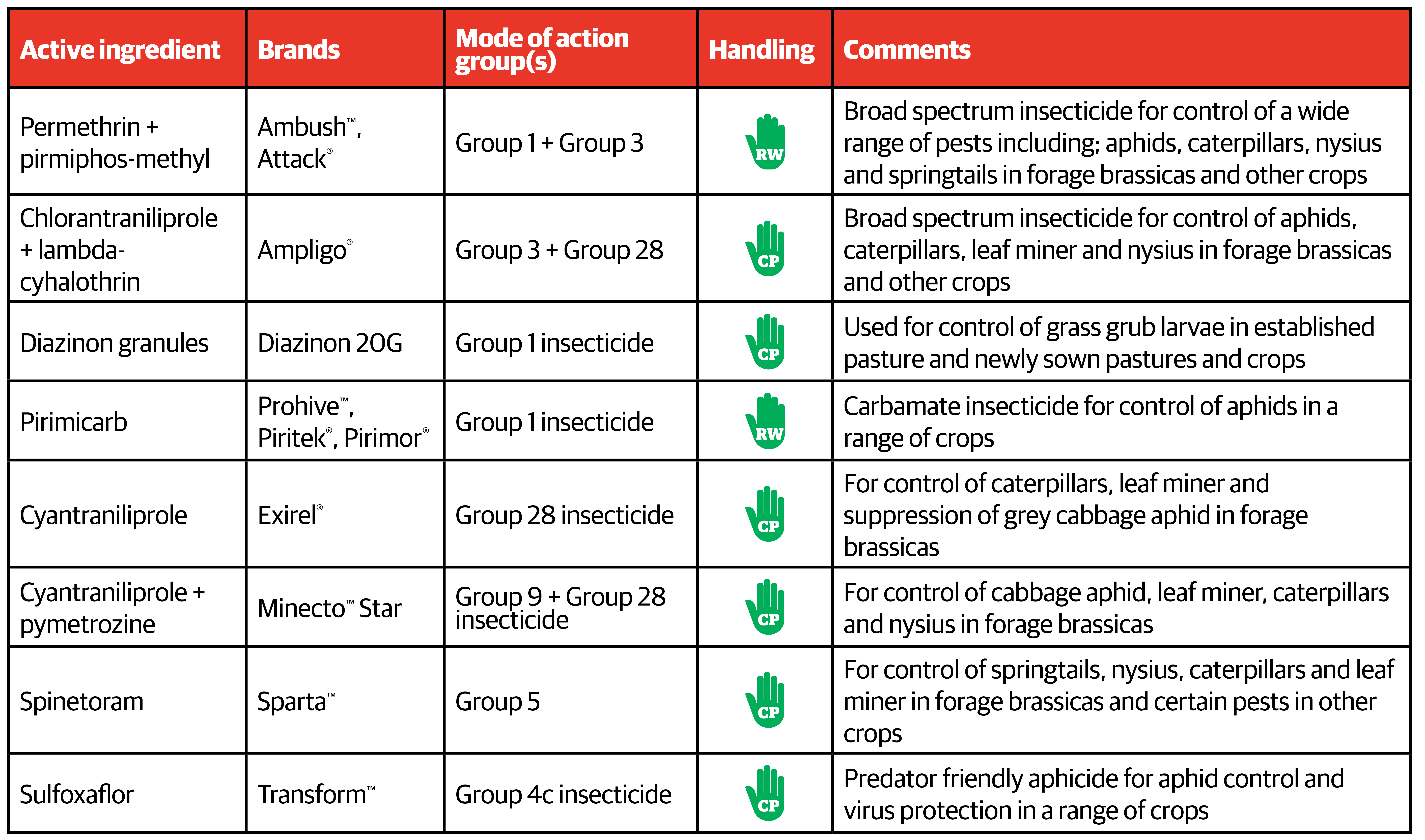 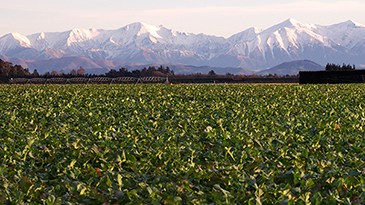 Soil testing from sky set to take off with new $2.5m investment

Glyphosate - one of the world’s most widely used herbicide