Cadmium is a naturally-occurring, non-essential heavy metal present in low concentrations in air, water and soil. Cadmium naturally occurs in phosphate rock from which phosphate fertiliser is made.

The Cd level, initially greater than 450mg/kg P, was brought down in stages culminating in a voluntary upper limit of 280mg Cd/kg P in January 1997. Since 2001, the limit on cadmium concentrations in fertiliser has been monitored and audited through the Fertmark programme. The analysis showed that the long-term average Cd concentration in phosphate fertilisers ready for despatch was 184mg Cd/kg P (Figure 1) - well below the voluntary limit.

Since 2003, there have been two individual samples declared as exceeding the 280mg Cd/kg P limit, which was only slightly above at 285 and 299Cd/kg P. However, in recent months the analysis showed cadmium levels in phosphate fertilisers was below 100mg of Cd/kg of P for the first time.

The industry continues to take a responsible approach with respect to sourcing raw materials and phosphate fertilisers with lower cadmium content, subject to market availability and trade constraints. 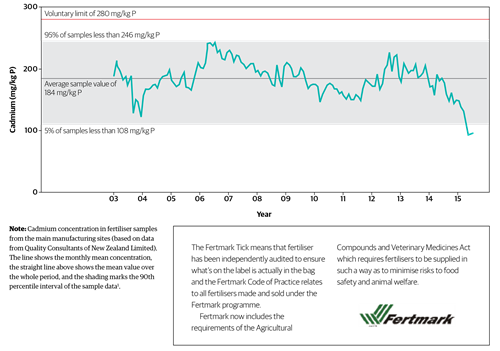 The fertiliser effect: How much cadmium is actually in our soils and food?

Cadmium is a naturally-occurring, non-essential heavy metal present in low concentrations in air, water and soil, as well as phosphate rock from which phosphate fertiliser is made. The fertiliser industry continues to focus on sourcing raw materials and phosphate fertilisers with lower cadmium content, subject to market availability and trade constraints.

It is encouraging that since bringing in the voluntary upper limit of 280 mg Cd/kg P, average cadmium levels in phosphate fertilisers were recently reduced for the first time to below 100 mg Cd/kg P. Although Cd levels are expected to fluctuate there is a firm commitment by industry to keep levels as low as practicable, recognising constraints of product availability and other manufacturing criteria.

Cadmium concentrations in New Zealand agricultural soils are measured by the fertiliser industry as part of the on-farm nutrient sampling. Some regional councils and research organisations have also collected soil cadmium data.

The primary source of anthropomorphic cadmium in agricultural soils is from phosphate fertiliser.  Many of the productive dairy farms in Taranaki and Waikato were developed with a long history of superphosphate use, which prior to the mid 1990’s was predominately made from Nauru phosphate rock (high in cadmium). These two regions showed more elevated soil cadmium levels relative to the other regions in New Zealand (Figure 2).

A pan-sector group formed the Cadmium Working Group, which approved a Cadmium Management Strategy, was formed in 2011 to implement the Strategy of manage cadmium in our soils, one component of which is the Tiered Fertiliser Management System (TMFS). This is a voluntary system administered by the fertiliser industry to actively manage phosphate fertilisers applied to soils that have been found to have elevated levels of cadmium in the soils. 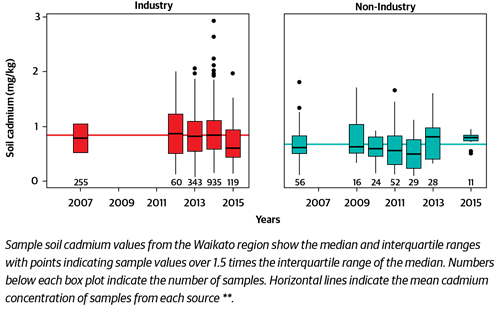 Foods that contribute most to the average cadmium dietary intake of New Zealanders are oysters, potatoes and bread – with oysters accounting for 21 – 28 percent for both adult women and men respectively (Figure 3).

Data on the concentration of cadmium in food is collected by the Ministry for Primary Industries as part of the New Zealand Total Diet Study. Every five years this programme samples foods following a simulated New Zealand diet. These foods are analysed for selected agricultural residues, contaminants and nutrient elements. The foods are bought at supermarkets and prepared as they would be by consumers. The study includes analyses of cadmium concentrations in a typical diet.

There have been seven New Zealand Total Diet Studies to date, including the first in 1974 to the most recent in 2009. A further study is currently underway. The 2009 study found that cadmium intake by different age and gender groups of New Zealanders was 50 percent or less of the provisional monthly tolerable intake recommended by the World Health Organisation.  The conclusion from the number of studies so far is that, subject to the assumptions of the diet study, there is no evidence of risk to the health of New Zealanders from dietary cadmium.

The connections between cadmium inputs, soil cadmium and cadmium concentrations in crops and produce are complex. Managing soil pH, soil organic matter and zinc levels are known to help reduce uptake by plants, however, other factors also have an influence.

Recent New Zealand research is consistent with earlier international studies on the uptake of cadmium by vegetables and forage plants and found marked differences between species and cultivars and only weak relationships between plant tissue concentrations and soil cadmium. Better understanding of the conundrum is the subject of further New Zealand-specific research, under the Cadmium Management Strategy.  Cadmium in the New Zealand environment continues to be the subject of active research and management. 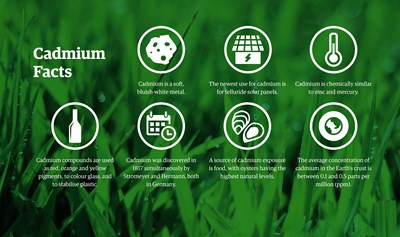 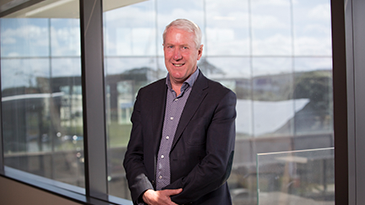 By Mike Manning, Ravensdown General Manager of Innovation and Strategy