Once the initial priorities of family home, access, fences and water has been addressed the impacts of slips on your farm business can be assessed and quantified.

First you will need to assess overall loss in production resulting from the slips, which are made up of two parts, face and tailings.

Tailings: The soil that was lost from the slip. Tailings are a tumbled mixture of the soil, rubble and buried vegetation. Tailing debris re-vegetates within 6-12 months due to existing plant material and from dormant seed already in the upper soil layer.

In some instances subsequent regrowth on these tailings is higher than the equivalent non-eroded slopes. It is appropriate to only consider the face as lost production.

Calculating immediate loss in dry matter
Estimate the percentage area of the slip face and the steepness involved (slips often occur on >28° slopes).

Generally this land has 60% of the productive capacity of flat/rolling country. Both pasture quality and utilisation is lower in steeper slopes.

Next: Feed budget and strategy 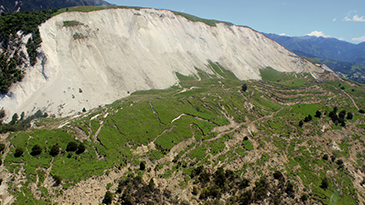