Carbon farming is providing options for the James family, alongside their sheep and beef operation in Canterbury.

It was 2007 when Warrick and Cece James became disillusioned with the returns coming out of the sheep, beef and deer industry and decided they needed a fresh start. Selling their family farm in Springfield, they took time to investigate their options and two years later purchased Flagpole, which borders the Selwyn Gorge. Flagpole had the diversity they were looking for in the 1,300 hectare beef and sheep operation, which they were still passionate about, and a forestry block.

Flagpole’s nine-year-old trees had been planted post 1989, qualifying to be sold for carbon credits, which helped the James family buy the farm before the market collapsed due to a flux of cheaper carbon credits available overseas. The block of radiata pine and Douglas fir are registered in the Permanent Forestry Sink Initiative.

“There is a lot of criticism of pines, but we have a huge problem to solve and we need every tool in the toolbox,” Warrick says. “The trees aren’t the total answer, but they serve as a sticking plaster in the short term, offsetting our carbon liability until we get a reduction in carbon emissions. The bonus is that it’s probably our most profitable enterprise and it’s being produced off the most marginal part of the farm.

“I must emphasise that you must only put trees on marginal land. You don’t know what’s coming with regards to the future of farming, but once trees are planted on hill country there is no going back.”

First you must choose what system you will use – permanent or harvest? Warrick was advised to go permanent because the block hadn’t had any thinning or silviculture done and the location was too difficult to get the trees out. Warrick adds that permanent also gets a premium, because its social licence is better due to its lighter touch on the environment.

To make carbon farming beneficial it’s best to be over 100 hectares as MPI doesn’t measure anything below that.

“Anything under 100 hectares is calculated off Lookup tables. With our exotic forest we’re sequestering nearly twice the amount of carbon than what the tables were saying, so it’s worth being at a scale that warrants physical measuring.”

Pick your weapon: exotic or native?

Warrick and Cece grow exotic trees such as radiata pine, Douglas fir and Eucalyptus because they sequester more carbon, due to their ability to grow faster.

In a recent interview, Julie Collins, head of Te Rakau/Forestry New Zealand, compared the merits of native vs exotic, where native will store more carbon long term if left unharvested – compared with a typical pine (exotic) forest harvested every 28 years. However, because exotic forests generally grow faster than native forests, they sequester carbon at a higher rate, helping most in the short to medium term.

Douglas fir – “They grow better in the shade; they can go higher in altitude. They like rainfall but not hot winds as their needles are quite fragile.”

Radiata pine – “They are the hardiest, they are resilient to hot, dry conditions yet grow fast – sequestering a lot of carbon.”

Eucalyptus – “They handle the dry well, a general all-rounder though they don’t like the wind so much. They sequester as much carbon as the pine.”

Fire and liability are the big ones, Warrick says. “If your trees burn, are chopped or fall, you incur a liability, which means you must pay all the earned carbon credits back. We’ve insured against that, but the rules are changing in the next two years, making it less onerous, in that you’ll only have to replant and get it back to the same age before you can claim credits again.

“For non-permanent forests, liability works differently. The new rules of ‘averaging’ mean you can collect carbon for the first 18 years, then harvest after a 4-5-year stand-down period. If you replant you won’t be liable. It works well in that you can claim an income all the way through the first rotation from carbon and then timber at felling.”

To spread the risk, Warrick has planted on different properties and at different stages to give him a more sustainable income and a succession programme for his family.

1. Get good advice – Get a good consultant and good planters.
2. Marginal land – Only plant what doesn’t earn or is uneconomic for other land use.
3. Don’t skip steps – Develop the land properly. Don’t skip or skimp on spraying, nursery care and good planting practices. Keep good fencing and pest management until the trees can hold their own.

What about 50 shades of green?

The concern is that the incentives to plant are going to drive mass planting of productive pastoral land, which will have long lasting consequences for provincial New Zealand.

“They’ve got a point,” Warrick says. “Whole property planting is not the answer, but you can’t stop people doing what they want to do on freehold land. When they launched the Billion Trees Programme in our woolshed last year, Ministers O’Connor and Jones were adamant they didn’t want productive pastoral land used for trees.”

Farming in a fishbowl

The James family’s passion for farming and the lifestyle it offers is what keeps them going in the face of all the criticism farmers get around environmental issues.

“You’ve just got to do the best you can. There are a lot of uninformed people out there who want change overnight. While there’s merit in what they’re saying, sometimes they’re a bit extreme and we need them to give us a break because we will get there. That’s why we use companies like Ravensdown who help us with solutions and advice. Our daughter Phoebe is our agri manager and is never too far away to get some advice. She has done our Farm Environment Plan and has organised our baseline, so we’re ready when the council requires it.” 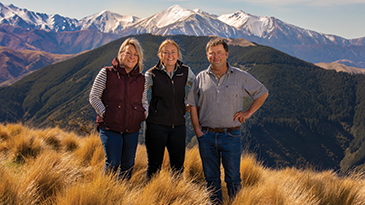