Ravensdown’s ClearTech system, developed in conjunction with Lincoln University, uses a coagulant to bind effluent particles together to settle them out from the water. This clarifying process reduces freshwater use, helps existing effluent storage go further and reduces the environmental and safety risks linked with farm dairy effluent (FDE).

Mason, who runs 550 cows on his 150ha operation at Green Park Dairy, says ClearTech is an environmental game-changer. Given dairy effluent is 99% water, it makes commercial and environmental sense to recycle the water using the ClearTech system.

“We’re in a sensitive environmental area here that is also quite densely populated,” Tom says. “So, we were really looking for the next level on environmental mitigation and that's what got us interested in ClearTech.

“It has significantly increased our effluent storage capacity. We’ve got capacity at the moment that meets the councils’ requirements, but we want more than that and ClearTech gives us three times the capacity and that means there are fewer days we have to spread effluent.”

But it’s in freshwater conservation that ClearTech really comes into its own.

“We’re using recycled water to wash the cow yard each day and that’s at least 30,000 litres of water per milking that we’re no longer using,” says Tom. “When we’re milking twice a day, we’re saving up to 60,000 litres of freshwater a day.”

With many lifestyle blocks in the area, and heightened concerns about effluent runoff and odour, Tom sees ClearTech as being an investment in his ongoing environmental and social licence to farm.

“We’re maintaining our right to keep dairy farming here. There are real pressures on this area, with subdivision into lifestyle blocks, so we need to be doing the right thing. ClearTech is an important tool helping us to do that.”

ClearTech Product Manager Carl Ahlfeld says the innovative, award-winning system not only made environmental sense, but commercial sense as well.

“Reducing compliance risks, saving on pumping, effluent storage costs are the bottom-line benefits to those farmers who also want to do the right thing in terms of reducing water use and reducing environmental impact.

“ClearTech is ideal for dairy farmers who want to save on effluent pond storage and take back control of their capacity and compliance.

“Stripping out the E. coli and other bacteria in farm dairy effluent means cleaner water to wash down the dairy yard or irrigate on to paddocks and less volume of effluent that has to be stored and used safely. The nutrients in the effluent can be reused back on to paddocks with minimal odour.” 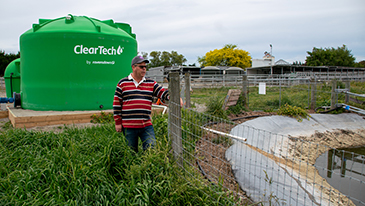