A ground-breaking method to turn dairy effluent into clarified water and treated effluent has scooped another prestigious award.

Ravensdown’s ClearTech product, which uses a coagulant to bind effluent colloidal particles to separate the solid material from water, won the Science & Research Award at the Primary Industries Awards in Wellington last night.

Product Manager Carl Ahlfeld said the development team was thrilled to have won another award, having already won the Agri Innovation Award at the South Island Agricultural Field Days and a highly commended award at the National Fieldays Innovation Awards this year.

Having put the revolutionary product through its paces at the Lincoln University Pilot Plant, Ravensdown has now launched ClearTech commercially.

“ClearTech’s had an incredible amount of effort put into its development by both us at Ravensdown and Lincoln University. It’s a great feeling to be in talks with farmers who want to make a difference to their environmental impact and who are keen to do so with ClearTech.

“Currently we are in the process of building three commercial units for Canterbury-based farms. We are also in discussion with other farms around the country for four or more units in the very near future.

“We will always be looking to improve ClearTech to make it the best product possible in terms of reducing water use and farm environmental impacts and look forward to having continued discussions with farmers and industry leaders who are interested in the product.”

The Primary Industry Award judges said it was a pragmatic on farm solution that we need more of.

Lincoln University Soil Science Professors Keith Cameron and Hong Di, who were responsible for the research behind the development of ClearTech, expressed their tremendous honour at winning the award.

“We developed ClearTech in collaboration with Ravensdown specifically to provide farmers with a new tool to help them to continue to improve the sustainability of their business,” said Professor Cameron.

“The scientific results are exciting and demonstrate the potential benefits of ClearTech for the farm and the environment. It’s a win-win technology.”

Professor Di said ClearTech will make a huge difference in reducing water use.

“This smart technology will improve effluent management and reduce environmental impacts on dairy farms across New Zealand. I am absolutely delighted that ClearTech has won another major award on top of the two recent awards at the South Island and National Fieldays.” 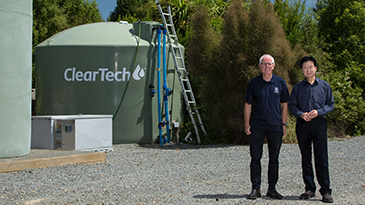