Agri Manager Guy Linton is looking forward to harvest at Nick Ruddenklau’s Waimate farm to see the results from his season's endeavours.

Guy has monitored the crops (barley, fodder beet, grass seed, peas, and wheat) on an almost weekly basis. His work has paid off - with harvest imminent all crops are standing.

It has been a challenge this year keeping on top of the diseases in the cereals. The weather has meant using robust rates of fungicides and PGRs to keep the crops standing and disease free.

Manganese, copper, zinc, and boron have been applied to the cereals according to tissue tests. These are easily added in a liquid form to the fungicide applications.

Herbicide timings are critical; applying them late will lead to poor control.

The fodder beet has just received some liquid B in conjunction with its fungicide application. Keeping the leaves green for as long as possible through the autumn will definitely increase the yield potential. 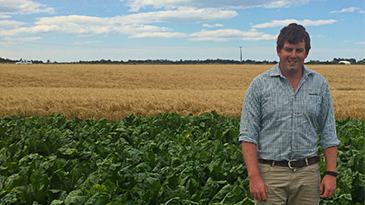