Dairy farmers who don’t want to handle the day-to-day running of their farm are increasingly turning to Waikato supervisory business, Dairy Direct, to oversee operations for them.

Based out of Ngatea on the Hauraki Plains, Dairy Direct has been in business for six years and now has 30 farms on its books. Unlike a consultancy, its three partners take direct control of the daily running of the farms, says Richard Townshend.

“Some farm owners don’t want to run their farms on a daily basis – they might be short on time or want a different perspective. I saw a gap in the market where there are a lot of farmers who could do with a hand, or they’ve had performance issues, and it really evolved from there.”

“The business probably started by accident. I was sharemilking one farm, and began looking after another farm for someone else. It made me start to think about the idea of doing this as a business. I enjoy farming but I think what I enjoy most is working with and developing young people.

“We enjoy working with young keen people in the industry. We get to spot some pretty good talent that comes through and it’s really nice to see those people move up through the system. They might start as a dairy assistant, then progress to assistant manager, farm manager and through to share milking. A few of these young people have gone on to equity partnership – it’s great to see.”

Richard is satisfied that Dairy Direct’s involvement is helping the bottom-line for farmers.

“Some of the operations we’re working with have either increased their performance with similar inputs or we’ve kept a similar level of performance but taken a lot of the inputs out and done it at a lower level of cost of production. It’s very satisfying.”

There are a wide variety of farms under Dairy Direct’s umbrella; 75% are on the Hauraki Plains and the rest in greater Waikato. While they have different breeds of cows, most run a similar operation.

Richard says farmers must be able to handle high and low dairy prices without changing their whole system around to cope with the differing environment.

“The biggest challenge everyone’s facing is the low milk price. We think our system is, by and large, sustainable at all levels of milk price because we focus on harvesting as much pasture as possible per hectare,” Richard says.

“It’s a deliberately simple approach – our first step is to just try and grow as much grass as we can per hectare by using the right fertilisers and urea. From there we try and harvest as much of that grass as possible and turn it into milk by having the appropriate stocking rate, implementing a good system and using good animal husbandry skills. It’s a really basic philosophy that just requires common sense.”

Pivotal to growing more grass is the soil.

“We’ve been working with Ravensdown for the last few years to help us with this. We soil test every single paddock on the farm and then we’ll make sure we do everything possible to get them to optimum fertility levels,” Richard says.

“Working with Ravensdown, we’ve actually been able to reduce the overall fertiliser bill by not putting a blanket maintenance dressing across the whole farm. We’ve been able to target certain areas that need more attention while putting nothing on the areas that are adequately fertilised. We’re using this approach across the bulk of our properties now.”

While Dairy Direct’s approach is hands-on, Richard believes that traditional consultancies would usually visit a farm once every four to six weeks, make a recommendation and follow up with a report.

“But generally that’s not followed through. We’re making decisions on farm in conjunction with what the farmer, sharemilkers or managers. Then we make sure all decisions are properly implemented.” 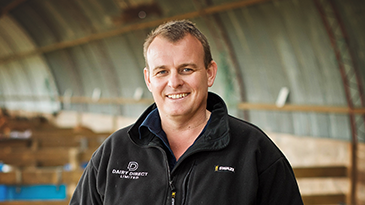 Published under Research and Innovation, Videos

Building the future, while solving problems in the present

The power of people

Farming the Mackenzie Country: you get out what you put in