North Canterbury sheep and beef farmer, Hamish Murray, got more grass than he bargained for this spring when trialing liquid nitrogen and gibberellic acid.

Hamish wanted to mitigate some of the damage from the drought and maximize pasture recovery from the recent moisture for lambing, and so decided to trial 30 hectares of the liquid nitrogen and gibberellic acid combination.

“We’ve been so desperate for feed from the drought that when Dan (Ravensdown Technical Manager Agronomy) recommended it I was keen to trial it, and it’s damn near produced double what I would have usually grown at this time of the year,” says Hamish.

Ravensdown Technical Manager Agronomy Dan Pavey says that the solubility of the mix plays a big part in the results.

“It (brome) comes a couple of weeks behind the lambs, which is too late. I’ve only done half my paddocks in this trial and you can see the visual benefits clearly. It’s certainly had a massive response.”

Hamish adds that the stock prefer the taste of the grass with the gibberellic applied.

“They’re staying on it longer and seem to really like the taste. It’s like I’ve put sugar on top of the grass.”

He says the paddocks that haven’t had the liquid nitrogen and gibberellic acid application are well back on the stocking rate and ewe condition.

“It’s been well and truly worth the cost. I usually run with an annual application of fertiliser but now I wish I’d done more. I’ll definitely be extending my application next year if our feed supply is down, which it usually is around here.”

Culverden contractor Sam Douglas applied the mix when the soil temperature was at just five degrees, two degrees lower than the recommended minimum temperature. Hamish says Dan had shown him a few pictures on what it can achieve under pretty low soil temperatures so he was reasonably confident.

Hamish says he was confident he was going to get a response, but wasn’t expecting it to be as good as it was.

I’d hate to think where I’d be if I hadn’t used it. 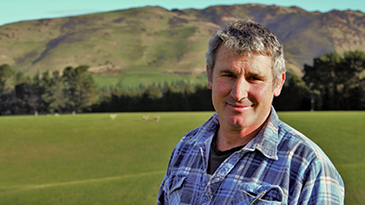