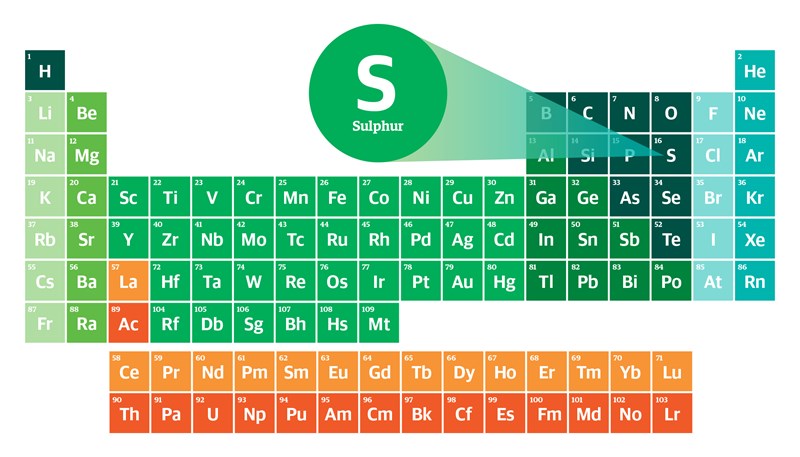 The non-metallic element sulphur (S) is the 16th element in the periodic table and is one of the 19 elements essential for life in all higher plants and animals on Earth. Sulphur ranks ninth in abundance among the elements. Sulphur, after calcium and phosphorus, is the third most abundant mineral element in mammalian bodies.

Prehistoric humans used S as a pigment for cave paintings, Egyptians used sulphur dioxide to bleach cotton from 1600 BC, while the Chinese have used S in explosives and fireworks since 500 BC. “Greek Fire” containing sulphur was made in the Middle Ages to burn opposing wooden ships or buildings.

Sulphur was recognised as an element in 1777 even though most S occurs naturally as either metal sulphides, e.g. galena (lead sulphide) or blende (zinc sulphide), or sulphates, e.g. gypsum (calcium sulphate) or barite (barium sulphate). Coal, oil and natural gas also contain S.

Elemental S is found in volcanic regions as a deposit where hydrogen sulphide from the activity oxidises in the air and forms crystalline pale-yellow elemental S. Much of the S used today is recovered from natural gas, oil refining, and the processing of copper, zinc and lead ores. About 85% of all sulphur produced is converted to sulphuric acid and used mostly in fertiliser manufacture, e.g. superphosphate and ammonium sulphate.

Why is S essential?

Plants take up S from the soil they grow in. Its key functions are:

In animals, the key functions for S are:

Animals ingest sulphur in their diets, derived almost exclusively from proteins. Proteins contain between 3% and 6% of the three sulphur amino acids. A very small percentage of S comes in the form of inorganic sulphates and other forms of organic sulphur present in foods such as garlic, onion and broccoli.

The vital role of S in agriculture

There are two forms of S in soil. Sulphate S is immediately plant available but is mobile in most soils except volcanic ash soils with high anion storage capacities (ASC). The second form is organic S which soil micro-organisms mineralise into sulphate S, which the plants can then use. Organic S levels are greater in soils with higher organic matter content such as brown and allophanic (volcanic) soils.

Fertiliser S comes in two forms, both sulphate (the form in superphosphate as gypsum) and elemental S, (as either Sulphur 90 prills or sulphur super products), which have molten S added to superphosphate during the manufacture. Soil bacteria, e.g. Thiobacillus thiooxidans, use elemental S as an energy source and convert the elemental S to sulphate S which the plants then use. This oxidation process acidifies the soil, and eventually a liming agent should be used to correct this acidification.

At present, while S as sulphate is relatively mobile in soils and can be leached to ground or surface water, it is not recognised as causing any environmental issues. However, the principles of the 4Rs (right place, time, rate, and form) for S fertiliser application should still be followed.

“Sulphur, after calcium and phosphorus, is the third most abundant mineral element in mammalian bodies.” 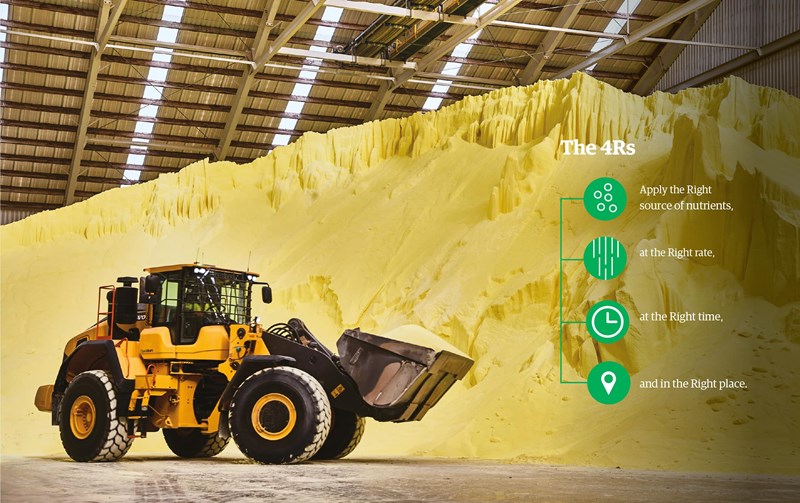 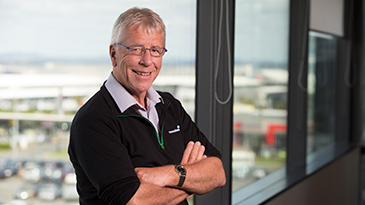