Farming with his wife Anne-Marie in mid-Canterbury for 26 years, Chris is arguably better known for his advocacy work in the environmental space. Leaving their jobs in software and aircraft engineering, Chris and Anne-Marie haven’t looked back since buying their irrigated farm near Ashburton, but dealing with the water policy has felt like a head wind.

The new RMA kicked in not long after the farm was bought, which started Chris’s involvement in water politics, submitting, alongside local Federated Farmers experts, to Environment Canterbury (ECan) on its Land and Water Plan.

“The Ashburton river has taught me a lot about water policy. Ten years ago, there was more weight on economics and the community’s wellbeing, with lay experts like me giving tangible evidence. Now, I can still have my say but if I want a better chance to change anything, I’d have to pay an expert to support my position.”

The Allen’s farm straddles the upper and lower river ratings’ districts with 60 farmers on the upper scheme to cover the same costs that the lower scheme affords over 20,000 people. The disparity in population numbers is also evident in representation of where the money gets spent and votes attributed – three votes vs nine votes. The consequence? A 15-year process to reach community consensus on a workable solution for one river.

“It’s no wonder we were going backwards, even the rates collected from the upper catchment weren’t being spent there. But we had to go through the process in tiny little steps to bring the others on the journey with us. It’s the same lesson we need to remind the government of now.”

Chris implores farmers to challenge what doesn’t sound right. “When David Parker said, ‘twice as many rivers are getting worse as are getting better’, he was talking about 8% versus 4%! How many people heard that devastating fact without questioning it?

“With great power comes great responsibility and distorting the facts to suit your narrative overlooks the progress farmers are making, with 80% of rivers stable or improving.”

Chris believes the pathway of focusing on numbers is useful for giving reference but it’s taking people’s eyes off the ball on what practices they can use to improve their footprint.

“If all you’re worried about is shifting the dial on a number then you’re missing all the opportunities for water quality. Canterbury’s approach has taken iterations to get to a plan that focuses on practices that achieve results for every catchment community in its own way.

“It’s about the hearts and minds in wanting to understand ‘how can I do it better tomorrow?’”

While there’s been much focus on the National Environmental Standards (NES), Chris is quick to remind us of the National Policy Statement (NPS) of Fresh Water Management.

Under the NPS, the current national bottom line for DIN (Dissolved Inorganic Nitrogen) of 6.9ppm (national drinking water standard) is going to be lowered down to 2.4ppm, which doesn’t seem too bad when comparing local alpine rivers at pristine levels of 0.01-0.02ppm and the Ashburton river at State Highway 1 sitting at 0.95ppm. However, the Allens have a well on their farm sitting around 4-6ppm and further up the plains, out of the high country, are wells giving DIN numbers of 3ppm.

“We just don’t know whether the DIN is sitting naturally high or caused by disturbance. The Government’s set aside a further proposed DIN limit of 1ppm next year that needs to be addressed to make sense of this proposal.”

Having just gone through a 12-month process with Ravensdown's environmental consultants to get their resource consent from ECAN, the potential of doing it all again is frustrating for the couple.

“It’s a bitter pill to swallow,” says Chris. “I’ll be very reluctant to spend another $15,000 for a piece of paper to say how we’re going to do our Farm Environment Plan. That’s 150 lambs before we’ve done anything different on farm. The challenge for sheep and beef farmers is that we’ve the same rules to meet but half the income of other farming systems.”

The stock exclusion rules aren’t new to flatland Canterbury farmers; however, the rush to get the rules out omitted definitions (e.g wire fences), meaning farmers will have existing fences that will need to be removed.

“This is an example of where they haven’t applied practicality to the rules. Farmers are practical people, we place our fences two to three metres from the waterway because that allows for space to walk along the hotwire, clean the ditch, plant something and allow for flooding and erosion.”

The winter grazing rules however…

“We don’t do it for the hell of it,” says Chris. “We’ve got 100 days of winter where we need to provide food for stock and protect our pasture for spring. We need winter grazing to do that because grass doesn’t grow in winter and stock won’t mysteriously appear in spring.”

While the 10% aspect of the winter grazing rules won’t inconvenience the Allens, the inclusion of sheep and lambs will be a challenge.

Chris has no doubt the rules are prescriptive.

“Why would they write it black and white if they didn’t intend to police it and hold farmers to account? It might not be this year, but one day the enforcement will escalate, and it might be outside a council’s control.

“We spend a lot of time each year deciding what paddock to put stock on. We’re making the decision based on soil type, shelter and water access and how the animals are going to get out of the paddock. The challenge on our farm is that we’ve got nine different soil types, making it hard to get the balance right.”

Wintering stock on the light soils means risking more nitrogen draining into the water table while putting them on the heavier soils will risk pugging the soils deeply.

The Allens are relaxed about the 190kg per hectare of nitrogen rule, having always tried to farm their system so they have the right amount of feed, at the right place, at the right time, with targeted nitrogen used mostly on season shoulders.

Chris laments that the amount of work done on community values over the last 10 years is at risk with the new rules.

“I just look at the huge amount of time and effort Canterbury farmers have put into these processes, the frustration at busy times of the year trying to get to meetings, and think what did that actually count for?

“It reminds me of Henry Ford’s quote ‘you can have any colour car you like as long as it's black’. I think the Government is underestimating how important it is to take the community with you and I worry about the parts of the country that haven’t had any exposure to this yet. They’ve got a freight train coming their way.” In the same breath, Chris believes that much of the country will be a lot better off, benefiting from Canterbury’s ‘fast out of the blocks’ mistakes.

In 10 years Chris hopes farmers will be more widely trusted, however, he’s not under any illusions.

“I just hope the goal post hasn’t shifted again and there’s recognition that someone, someday soon is going to have to find some cash to pay for all of this.” 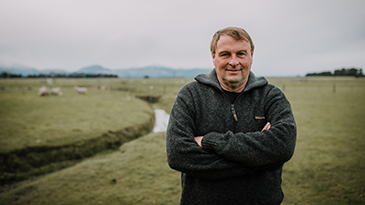 Getting the best response from N

The importance of having legume in your permanent pasture