Minimal yield response to high applications of both nitrogen (N) and potassium (K) fertiliser in fodder beet crops are good news for both the farmer’s pocket and the environment, trials show.

The second season of the three-year Ministry for Primary Industries (MPI) Sustainable Farming Fund (SFF) project on Fodder Beet Agronomic Solutions has concluded, examining the response of N and K over a range of application rates on fodder beet.

The project was undertaken to inform farmers on fertiliser responses and assist in increasing profitability by minimising costs and maximising yields.

Ravensdown Agronomist Chris Lowe has been involved with trial work in South Canterbury, located on Haden and Julie Batty’s Orari property, one of seven sites around the country.

What we have found is the high rates of N applied in the past are not necessary. Statistically we saw no difference between treatments above 100kg N/ha, therefore there is a potential for cost saving for farmers.

The first season of the trial focused on looking at crop agronomy, performance and fertiliser response. The consistency of the plant response to fertiliser rates over different soil types was the primary focus of year two.

Soil tests were taken before and after the study and fertiliser was applied at 50kg N/ha increments up to 300kg N/ha. Orari had the lowest total available N because of the shallow stony soils, making it the most likely to show a response from application. However, there was no yield increase recorded with fertiliser rates higher than 100kg N/ha.

“Obviously the higher application rates increase the N concentration in the plant but this leads to environmental implications. It may be better in terms of protein content for animals but you have the spinoff of high N in the urine.”

The highest CP level in the current experiment of 9.3% is lower than the 12% needed for animal maintenance in winter.

Chris says one of the key components of N management is understanding how much N is readily available in the soil.

“I think the key is to measure N beforehand so you know how much N is actually in the soil. If you can measure what is in the soil then you can manage what you put on.

“It is also vital to understand that N applications are all about driving canopy growth to achieve canopy closure at the longest day, so early N is critical. After Christmas it is all about maintaining canopy and green leaf retention so attention should turn to disease control.”

Average yields for the Orari crop were down from 33t DM/ha in year one to 29.2t DM/ha in year two, which Chris suspects is a result of the beet western yellow virus. He says the yellow leaf that occurs with the disease is sometimes misinterpreted as K or Magnesium (Mg) deficiency.

“I know of companies that have recommended 300-400kg K/ha - just crazy amounts - because they think the yellowing is all about potassium. We regularly tissue test our crops and rarely see Mg or K deficiencies.”
He says farmers should be questioning these recommendations, particularly as the trial sites have not shown a consistent yield response to K across a range soil types over both years.

The second season K trials were undertaken on three of the seven original sites, located at Orari, Gore and Whanganui. With lower soil K (quick test 3.0) at Orari, again a response could have been expected, however there was no yield increase at higher K rates and a very small K plant concentration increase from 2.23% K for the control to 2.57% K at 150kg K/ha. In this case, the crop had sufficient access to reserve soil K, so that yield was not limited by lack of K. A recommendation is for less K to be applied in situations where adequate K is derived from soil reserves. From a sustainability perspective, consideration must be given to the amount of K removed in crop harvest and the amounts that may be returned in dung and urine during grazing.

Across the other sites, only one showed a response for yield (control vs 150kg K/ha), and all other sites showed no effect from rate or timing of K. Luxury uptake by the plant at increasing K application rates was seen at other sites.

“These excessively high rates of fertiliser are wasting money. If you are trying to raise your K levels then that is another issue, but generally speaking the nutrients are returned because it is all grazed in the paddock.

"I feel more attention needs to be paid to the aphids that are transmitting viruses to not just beet but also brassicas. It is critical we have a greater understanding of the potential insecticide resistance out there and gain more information into when there is likely to be a threat of virus transmission. I also strongly suggest that we aim to look after our beneficial insects because they are our friends after all!” says Chris.

The final year of the SFF trial will look at expanding these findings to paddock scale and further attention will be given to foliar disease control. 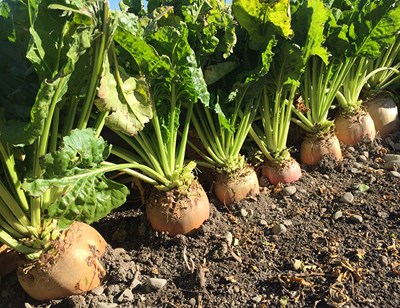 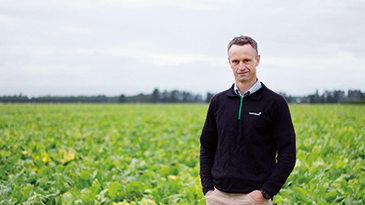