Facial eczema occurs when ruminants ingest spores with toxic sporidesmin from the Pithomyces Chartarum fungus. This fungus is always in pasture swards but only sporulates in warm, moist conditions - usually rain after a hot, dry spell.

Clinical FE shows up as photosensitivity (like scald from rape) but most incidence of FE is sub-clinical damage to the liver. Liver damage affects all production. It is estimated that if 5% of your flock show clinical signs of FE, that 50% will be suffering from sub-clinical effects. This is the hard part of managing FE - sometimes you don't even realise you have a problem. Even sub-clinical effects can reduce lifetime productivity by 20%. This liver damage is irreparable and cumulative so a five-year -old ewe who may have had small amounts of exposure in several years might have a badly damaged liver - they do not get "sensitised" to it.

This sub-clinical liver damage shows up through poor scanning result in ewes, depressed growth rates in young sheep and cattle, and in severe cases, death. Ewes that are affected by FE when in lamb can use their lamb's liver to filter toxins but then when they give birth and don't have the on-board dialysis system, they die.

You can't cure FE. Once the liver damage is done it’s there for the life of the animal and the subsequent drop in production is locked in.

Be wary of companies pushing products that claim to undo the effects of FE.

You can treat affected animals by giving them shade, water, and a low- protein diet that doesn't include chlorophyll (hay, silage, hard feeds).

Spore Counting
The first step to addressing a FE problem is to know you have a problem. The production effects of facial eczema will be harder felt in areas that were "virgin" FE areas because they weren't aware of the problem until it was too late.

Counts of 80,000+ are usually considered dangerous but by this stage the horse has already bolted. When spore counts get to 20,000 and rising you want to start taking preventive action on farm. At this point it might be good to start testing samples from your farm rather than using published district averages.

Use of Alternative Forages
Crops like chicory, clovers, Lucerne, plantain, and brassicas are considered FE safe. If you have these crops incorporated into your cropping rotation, try to graze pastures through the early summer and have these crops coming online through the high- risk periods. These crops might be prioritised to the animals most at risk of an FE outbreak.

Don't graze too low in the sward in high risk times - the spores live at the bottom of the pasture sward so in danger times don't push stock to clean up paddocks.

On a whole farm system you will need to think about how this will work.

Zinc Treatments
Treating animals with zinc can negate the effects of FE as the zinc reacts with the sporidesmin and stops the damage to the liver. Zinc can be administered by an oral drench, a slow release zinc bolus, or in many dairy farm situations into drinking water.

You need to be quite proactive with zinc treatment to start before the spores are ingested but not so early that you develop zinc toxicity.

Oral drenches can be a bit impractical as for best protection animals need to be treated twice a week (or even daily). Drenching every fortnight will reduce damage by up to 50% but is still a big commitment in a large ewe flock.

Zinc boluses will cost around $3.30 per capsule and will give protection for 6 weeks (note, in some seasons the danger period can continue longer than 6 weeks).

Fungicide Spraying
There are fungicides available that can be applied to pasture. These sprays will interfere with the production of spores but won't kill the spores/fungus already in the pasture so you need to be proactive with application before the spore counts get too high. This treatment will significantly reduce the spores for up to six weeks but it isn't a 100% fix so keep testing pastures.

Some sheep are more tolerant to FE than others and it is a very heritable trait (0.42). Some stud flocks will annually test the resilience of their rams to FE each year using the RamGuard test provided by AgResearch.

The test isn't cheap - it costs about $300 per ram so breeders won't test all their rams but should at least test their elite sires that they put over their stud ewes.

It's a bit of a brutal test - basically the rams are given (poisoned) with a specific dose of sporidesmin. If this causes liver damage, an enzyme is released by the damaged liver which can be picked up in a laboratory test. If no enzyme is present, the ram is resistant to that level of challenge.

Typically a stud will start off challenging at a lower dose and as the resistance of their flock builds up over time will increase the dose their rams are challenged at. This level of challenge will give the stud a RamGuard flock star rating with a dose less than 0.20mg/kg LWT giving a one-star rating and a dose greater than 0.60 a five star rating.

If a stud has been challenging at least 10% of their sale rams with a dose rate greater than 0.60 for more than 10 years they achieve an FE Gold status. There are only 18 in NZ - the list can be viewed on www.fegold.co.nz.

You can't just put an FE tolerant ram over your ewes once and hope to be safe. Only about 40% of a ram's tolerance will pass onto his progeny so it will take several generations to build up tolerance across your whole flock. Also a stud won't test every sale ram and not every ram they do test will pass. So while a breeder may be only putting tested rams over their ewes and making good genetic gain against FE, the specific rams you buy may not be tested and therefore some may not be tolerant. This will only work over your flock if you are consistent with it over several generations of your ewe flock.

Questions to ask a ram breeder:

The last point is important not just for FE. The more traits a breeder selects for the slower the genetic gain will be. The risk is by selecting for FE tolerant rams that other important traits (fecundity, growth rates) will be slower. This is generally not an issues as the order of selection is to cull rams on the usual traits first, and then test the top ranked rams for FE tolerance not the other way around so for a ram to get to the point of testing it needs to have pretty sharp figures for the usual EBV's first. 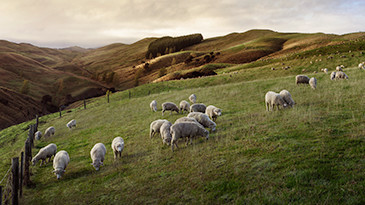 What's next for me?