Farming for the future in the deep south

A shared passion for farming and providing high-quality nutrition to the world is the driving force behind a Southland family’s approach to farming. Ravensdown visited shareholders Jolene and Hadleigh Germann’s property near Ōtautau to get the low-down on how they have reduced environmental impacts on farm and their involvement in a large-scale catchment group.

Jolene and Hadleigh Germann want to leave a farming legacy behind them in the hope their children will one day get to experience the industry as they have.

Relocating to Southland from the Waikato 10 years ago, the fifth-generation farmers formed an equity partnership four years later on a 200ha property between Ōtautau and Nightcaps, where they peak milk 550 cows as lower-order sharemilkers.

Hadleigh grew up on a dairy farm and Jolene on a sheep and beef property, but their passion for farming is something they’ve always had in common. Jolene studied chemistry at the University of Waikato, completing her PhD before moving to Southland where she worked as an agri manager for Ravensdown and later as an agribusiness consultant. She sees farming as a great lifestyle for the couple’s two small children, Harry (3) and Lucy (1), and they remain strong advocates for the industry, in the hope that one day their children may be encouraged to follow a path on the land.

“I think most family farmers are environmentalists,” Jolene says. “We want to leave the farm in a better state than we found it. Everything we do, we think about our children and their children, and what's going to be left behind when we're gone.”

Their first year of farming in an equity partnership coincided with the low milk pay-out of $3.90/kgMS which forced them to scrutinise their entire farming system in detail. The farm is slightly terraced and can be wet, so they have adapted to these conditions by running a lower-than-average stocking rate for Southland. The heavy soils mean they are very particular about where, or even if, they choose to cultivate, depending on the conditions.

The Waikoura stream runs through the farm, feeding the Ōtautau stream which then flows into the Aparima River. A great risk on their farm is phosphorus run-off on rolling slopes, so they’re careful what paddocks they crop and how they treat them in spring, as well as using best management practice for winter grazing.

“We always identify swales and leave those parts of the paddock uncropped, so they remain in grass,” says Jolene. “Then we graze towards the swales so that any nutrient run-off runs into them as a buffer and doesn't go directly into the waterways. We've been doing this for the past few years, and it's made a big difference to the amount of soil entering into the waterways.”

Jolene says they have been lucky to have guidance on nutrient management from Ravensdown Senior Agri Manager Dayle Kirby. They are specific about where they place nutrients and have an in-depth soil testing regime. They GPS the soil transects so each year they’re testing the exact same line, and a Whole Farm Soil Test is done every five years.

“The Whole Farm Soil Testing is really helpful because it looks at the range of nutrient levels that we have. We test every paddock and adjust fertiliser mixes to make sure that we're targeting our lower paddocks and not putting any nutrients on our [higher fertility] paddocks," Jolene says.

"It makes sense, both financially and environmentally. You're not just blanketing the whole farm – Dayle puts a lot of time in to making up mixes that are both practical and help achieve the goals we want for nutrient levels on the farm.”

They’ve used Hawkeye® for the past season and a half and have found it excellent. “It's a pretty fool-proof system,” says Jolene. “All the fertiliser recommendations are loaded, and Hadleigh usually goes on and orders what he wants, and it goes straight to the carrier. It also offers proof of placement, which is very important with compliance and making sure that you're getting the right nutrients on your farm.”

When it comes to nitrogen (N) use, they use a consultant to create a monthly feed budget while Hadleigh and the team do a weekly farm walk to assess pasture levels. Hadleigh follows the cows with N applications, and they use N-Protect (a urease-inhibited coated fertiliser) to protect against N-loss through volatilisation.

Historically they have used 200 – 210kgN/ha but have dropped back to 190kgN/ha. “We have had a hard look at how we've been using N and made sure we're applying it to get the best response,” says Jolene. “Part of that is lowering the volatilisation risk [with N-Protect] so there’s more N available for the plant to grow. We want to make sure that everything is available to be taken up by the plant.”

Working on water for the future

Water quality and community involvement is also a large part of the couple’s farming philosophy.

Jolene completed the Kellogg's rural leadership course in 2016, with her final course project centred on how to help farmers in the environmental and water quality space. This led her to co-start the Mid-Aparima catchment group and, three years ago, a wider project known as the Aparima Community Environment project (ACE) was started with funding from DairyNZ.

In 2021 ACE received $421,100 of funding from Thriving Southland for project work. The projects are divided into work streams, including a water sampling programme to complement Environment Southland’s work, as well as a stream-walk programme for local landowners and communities to assess the health of local waterways.

Another project looks at sediment trap designs and they eventually hope to create a network throughout the catchment, in partnership with Environment Southland. Ravensdown is involved with the third workstream, helping farmers within the project area with their Enhanced Farm Environment Management Plan (FEMP) programme, and the final project explores future farming systems with ultimate outcomes of improving soil health, greenhouse gas emissions quality, freshwater ecosystem health, animal health, as well as maintaining profitability and resilience to change.

Jolene says a really a vital part of ACE has been the partnerships formed. “We really wanted a vibrant community that included farmers and stakeholders. We want our environment to be better, but we want our communities to be strong too. We'd already achieved quite a lot before we got this funding, and we can achieve a lot more together than we can as single farmers or community people.”

She says that while personally at times farming and being involved in the project has been a juggle with two small children, part-time work and no family support in Southland, it’s a case of busy people achieving lots. “Hadleigh and I are both very, very passionate about ACE and making our environment better, so we're happy to be involved. And when you work with like-minded people on projects like this, everyone's positive, and everyone sees the opportunities as well as the challenges, but they focus on the opportunities. It's just a great partnership to be involved with.”

Jolene remains positive about the future of farming.

“New Zealand farmers are incredible and have made a lot of improvements in the last decade. I think we need to continue to improve and look at getting more from less, while using nutrients wisely. It’s about looking after our waterways, looking after our soils, and looking after our people. We have made lots of progress, but there's still lots to be made.” 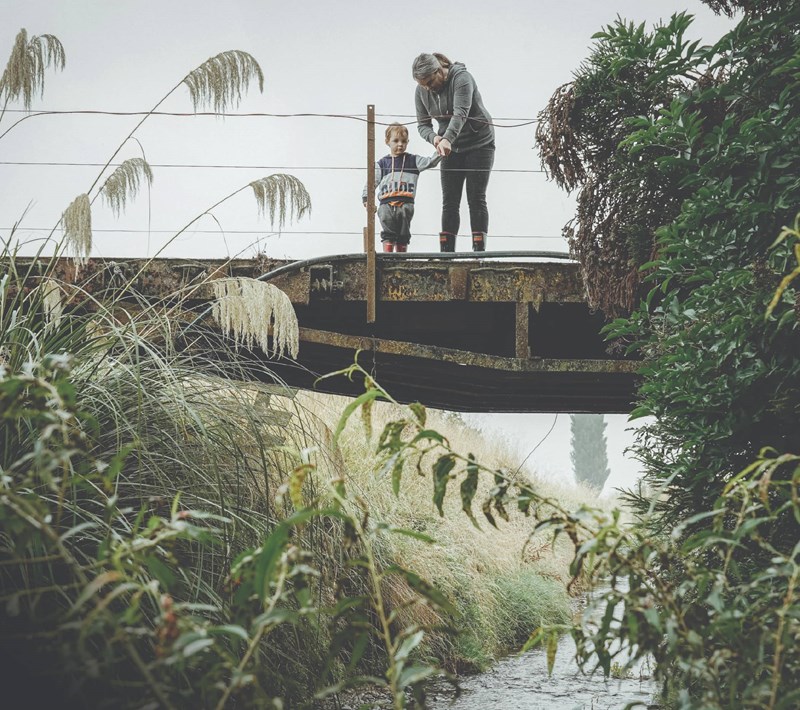