Farming the Mackenzie Country: you get out what you put in

Mackenzie Country high country farmer Andrew Hurst has not stood still since he took over the lease of two adjoining farms four years ago.

Run as one unit, the farms belong to his parents and cover 2,300 hectares - running from pasture, to tussock, into high alpine and mountain terrain. Since Andrew took, over he has been committed to developing the land and building stock numbers, to put him in a position where he and wife Jo can buy the business outright.

“You get out of your land what you put into it, you can’t cut corners,” Andrew says.

Andrew’s sheep and beef operation holds 3,300 coupworth ewes, 900 hoggets and 300 angus beef cows, and finishes all the heifer calves and most of the lambs. He’s also investing back into the land, reclaiming about ten hectares a year and continually re-fencing.

The harsh climate of the Mackenzie Country sees Andrew spending all summer prepping winter feed to get the animals through.

“Low soil fertility is a big problem in the Mackenzie Country – it has quite an acidic soil, so a lot of lime is required. We get good summer rainfall which is in our favour, however we’ve a lot of weeds. But if you’ve done everything right, when the rain does come, the crop will grow.”

To get the best silage stocks and crop growth we’re continually soil testing, to build up fertility.

While Andrew’s father always had a good handle on soil testing, Andrew moved quickly to develop the farm using the latest Smart Maps and aerial technology available from Ravensdown.

“We’ve come a long way in the last three years. This is only the fourth season on our own, and we’re really starting to get somewhere now. We’re running 400 more ewes and finishing more cattle with great new pastures. The ewes are the best they’ve ever been this season due to high performing crops.”

Andrew has invested a lot into continually monitoring and assessing the business, which he says has paid its dividends.

“I try and do everything properly. We don’t cut corners on cropping, fert, agri chemicals or seed. If I get a recommendation from the team at Ravensdown, I do it. We can’t afford to have a failed crop as we rely so heavily on winter feed and we haven’t had one yet. Whatever it needs - direct drilling, spraying early, two sprays, urea - if it needs capital, it happens. It can be very tempting to try and reduce costs by cutting corners on drops but it just doesn’t work and you end up paying for it.

“A good example was last year, which was challenging for everyone with dry windy conditions but we had good crops and lambing and it ended up being a great season for us. The key is you get what you pay for. We’re just so well monitored by Ravensdown. Their attention to detail and knowledge has headed off a few things by being onto it early. There were a couple of times last year when bugs were moving in but Lisa Chapman, Ravensdown’s Seeds Technical Manager for the South Island, made an early call and we pretty much saved the kale crop from nysius fly, which can decimate a paddock if you leave it. A month later Lisa and her colleague Andree Callaghan advised on putting on the urea at the right time and we ended up getting a prize in the winter feed competition for that same kale crop!

“With just me on the farm, and a small amount of casual labour, it’s a pretty busy place around here. I can’t be everywhere all of the time so I have to rely on good advice and product. The reps are fantastic, bringing the right product at the right time. It’s just quality product and service. You simply can’t afford to let your guard down when it comes to winter feed. It’s well worth doing it properly when it comes to tonnage.” 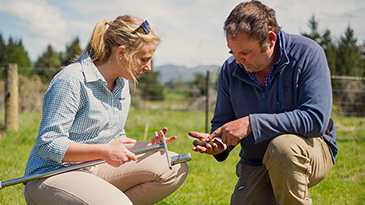 Health and safety upgrades rolling out

Developing land from the air