The petrol for your farm engine

The Winchmore Research Station, in mid-Canterbury, started in the late 1940s with trials into irrigation, fertiliser use, pasture production, pasture composition and effects on soil biology e.g., earthworm numbers, and has reached its milestone 60th year of operation.

The soil at Winchmore is a Lismore stony silt loam. Interestingly, the top 100mm soil profile changed with irrigation and increased earthworm activity over the years. So the soil is now virtually stone free. The pasture consists of perennial rye grass/white clover dominant with dogstail prominent in the spring and cocksfoot and red clover in autumn (original sown species) on the fertilised paddocks. The Control paddocks are dominated by much more low-fertility grass species.

Since 1952, continuous annual fertiliser applications have included no fertiliser (Control), 188 and 376kg/ha of superphosphate. Since 1980, there has also been a Sechura RPR/elemental Sulphur (S) treatment equivalent to 250kg superphosphate/ha/year, as well as a 250 kg/ha superphosphate treatment. For the fertiliser trial, small paddocks (0.08 ha) replicated four times are grazed by separate mobs of sheep that rotate between the replicates during the September-May growing season. The stocking rates are set so that pasture utilisation achieved for each treatment is approximately 80%.

While their pasture production varies considerably year to year for all the paddocks regardless of whether they receive fertiliser or not, the paddocks that have received no fertiliser since 1952 (Control) grow an average 6t DM/ha a year. In comparison, the fertilised paddocks average between 12 and 15t DM/ha a year. The paddocks that receive double maintenance (376kg/ha superphosphate a year) average slightly higher yields. This demonstrates the point that it is not necessary to keep driving soil fertility higher than necessary to produce near-maximum production, but to get to the level of soil fertility that achieves this and then maintain it.

In the case of the Winchmore sheep-grazed pastures, this would be Olsen P 20-25 which can comfortably be maintained using around 188kg/ha superphosphate.

Visual observation and measurements of the pastures across time quite clearly show that more ryegrass and white clover are present on the fertilised paddocks, consistent with better quality feed available for animal production. A great result given that both feed quality and quantity drive animal production.

An important point to make is that no soil organisms (earthworms, micro-organisms) were killed or injured in this long-running trial – quite the opposite as occasional measurements have recorded that earthworm numbers and soil biological activity has increased on the fertilised paddocks relative to the non-fertilised ones.
This is not surprising and can be attributed to a response to their increased food supply due to increased dung and urine return, more root turnover and death of uneaten herbage promoted by fertiliser application. 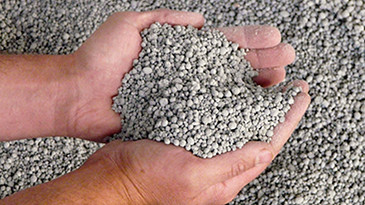 Not all GPSs are equal