Brett and Ruth Steeghs are building a 100-year company while raising a young family on their Central Plateau dairy farm. They share their passion and ‘pasture first’ insights with Ravensdown.

“I’d like what you’re giving them.” Agri Manager Eva Brakenrig has lost count of the times she’s been asked for this after her client Stone Country Dairies was profiled in the Pasture Summit – a collaboration between the New Zealand and Irish dairy sectors.

The Steeghs farm on pumice soils northwest of Taupō on 170ha effective area with 460 peak cows generating production of 973kgMS/ha. The Pasture Summit visit to their farm gave them a chance to share their passion for pasture and how they are making progress across their farm business.

“I’m a curious type and always thinking of how to improve,” says co-owner Brett Steeghs.

“It starts with questioning and realising you’re not the expert. The good news is that New Zealand farming benefits from access to experts from a variety of co-operatives like Ravensdown.

“We tend to chip away doing our own thing, but seeing that comparative performance is ideal for those who want to learn. That kind of benchmarking with those around us means you’re not missing something somewhere.

“It might also confirm what you were wondering and you may not need to change either. It seems like that’s a rare thing in the world and a huge asset for the dairy sector,” adds Brett.

Pasture focus for a family farm

With their young family, work-life balance is plainly a factor.

“Our kids are growing up on and around the farm – it’s important to us that we have the time and flexibility to ensure they enjoy it. We’re proudly a family farm and we need to keep things simple so staff can take over when we want to do the things that other families can do, like go to the beach.

“We believe in simplicity and accuracy. You’ve got to work at stripping decisions out because every decision is a chance to get it wrong. For example, more production doesn’t mean more profit and can mean more complexity, and cost finds a way of creeping in.”

Cow condition is monitored closely. “We move to once-a-day (OAD) if they are starting to look on the light side.

“We tend to go for Kiwi-cross which is the ‘Hilux of cows’ – they are great hill-climbing grass-harvesters and we’re after a lower replacement rate,” says Brett.

Farm-grown feed comprises 97% of the herd’s dietary needs. “We’re strict on supplements, using it only to bridge lactation in the event of a dry summer. But you’ve got to watch for that substitution effect.

“Working back from the fact that February and March can be increasingly dry, we focus on calving as early as possible, and maximising production during the days-in-milk before Christmas. The autumn slowdown kicks in fast, so it’s all about growing grass when we can.

“It’s a constant battle to reduce our environmental footprint. We’ve been slowly pulling our nitrogen (N) back and supplementing with a bit more potassium (K),” says Brett.

Applied N was reduced from 188kg/ha to 145kg/ha last year and, according to Brett, timing is everything.

“We keep a close eye on the weather because risk of losses of N to the air are pretty high as temperatures climb. Another way to help lower our N applications is to focus on clover in the sward. On their recommendation, Ravensdown supplies us with the K we need to feed that clover and we’ve seen big clover responses to that K and sulphur (S). It’s really taking off which is good to see.”

“We’re on a volcanic plateau up here. In its unfarmed state, we’d be looking at low levels of P, K and S as well as magnesium (Mg) and calcium (Ca). We’ve got to stay on top of that by testing each paddock for nutrient status and things like pH. We turn to Ravensdown for the suite of nutrients, based on the right testing and good advice from our specialist agri manager. Eva helps explain the soil tests and recommends what to do.”

Ammo is popular in this part of the world explains Eva, especially as rain over volcanic soils means the S doesn’t always stay plant available as long. “The soil can be a bit like a sieve below that topsoil and organic matter that’s built up over the years,” says Eva.

“Because of the soil testing, the variability has been managed down. They have invested in P applications in the past, so they can now ease back on the P in the next two to three years,” she says.

“Herbage testing (sourced from Ravensdown’s laboratory ARL) can also be important so we can correct for trace elements.”

Brett takes a low-input approach with a focus on pasture and grazing management. His aim is always to maximise the amount of feed harvested per hectare. This farm was converted 25 years ago and has produced plenty of nutritious milk in that time, but total pasture production is not the primary focus.

“The ball we keep our eye on is the pasture harvested, which has a strong positive correlation with profit/ha,” says Brett.

A close eye is kept on covers and the residual level is paramount.

“We manage any surplus by cutting silage and banking that feed. We start with quite a long round at the start of calving – we’d be on around 100+ days and the fastest we’d get up to is 21 days at balance date.

“Then at Christmas, we start pushing the round length out which can be tricky because we often have a lot of grass, but you know that pinch is coming.

“There’s good organic matter and carbon in the soil. Our land profile is rolling and our soil is volcanic so the variability in fertility creeps in over time. If we don’t keep track of that, our blocks aren’t working as hard as they could and we’re putting costly fertiliser on when it could be better used elsewhere.”

The previous owner committed to Whole Farm Soil Testing six years ago and it was repeated six months ago. “We’ve seen reduced variability which is really satisfying. One paddock had low P and low pH and, after we targeted P and lime applications, that is now in line with all the others.”

Brett self-applies his fertiliser and says the mixes need to be flexible to work with freight and on-farm storage issues. For example, they have now removed salt from their spring mixes as it doesn’t store well in the bin in the mix and can make spreading challenging.

“I’m running variable rate (application) and the soil test results tell me what to avoid beyond the no-brainers like the camping spots. We tend to follow the cows through the spring – little and often is the key.”

With another child on the way, both Brett and Ruth have their hands full. This drives the desire for a simple approach but Brett says it runs deeper than that.

“Our generation perhaps notices the wellbeing aspects a bit more. We’ve seen people burnout after achieving their dream. We’re trying to build a 100-year company. As a family, we’re in this for the long haul so will be trying to take care of business by taking care of ourselves.”

If that’s the case, over the years to come there will be many more passers-by who glance across the fence and want a slice of what the Steeghs are having. 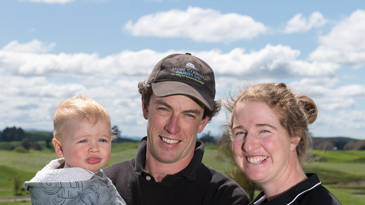