Sharemilkers Ben and Heather Peake farm 800 dairy cows on Simon and Carolyn  Spencer Bowers seven year old conversion (East Claxby) just north of the Waimakariri River, and are starting to make traction in getting the farm’s soil to maturity to hold its nutrients and water better.

“Our end goal is to reduce our N loss to a more sustainable level. Proposed Plan Change 7 has dramatic requirements, which is going to have a massive effect on the area,” says Ben. “We may not own the farm, but we do have the responsibility to preserve it for the next generation.”

After their first season of switching to N-Protect from straight urea, they have already been able to reduce their annual use of nitrogen fertiliser from 300 to 250kg N per hectare, keeping more N in the soil and less in the atmosphere.

“What we’ve seen is huge in terms of the results from the season. We are able to put less units of N on per hectare because N-Protect is better utilised by the soil. Come the middle of May the grass with urea applied was coming back really yellow and patchy - you could see it was deficient - whereas the N-Protect paddocks were coming back evenly green,” says Ben.

Ben says as a 50/50 sharemilker it was a joint decision with operations manager Peter Spencer Bower, but choosing N Protect over standard Urea has paid off in achieving better value for their fertiliser expenditure.

“You know what you’re putting on is getting used, you can see it. Price wise it’s the same cost because we’ve been able to drop 50 units of Nitrogen per hectare.”

After an application on 20 April 2019 Ben is still seeing a good pasture response in early August and was able to hold off longer before the first application in spring. The difference, Ben says is that N-Protect keeps more N in the soil by comparison to urea, limiting the losses you get directly after spreading.

“Long term that means we will be able to reduce Nitrogen inputs, which will be better for the bottom line and our sustainability. It’s less spreading less carting and all the other factors that come into it.”

Ben’s Senior Agri Manager Jane Garrett says it’s not just N-Protect that pays for itself, his whole farm soil testing (WFST) is returning some dividends too.

WFST has been carried out regularly since 2015, and through this process a number of paddocks with low Olsen P levels were identified. Having each paddock’s information has allowed the fertiliser plan to address these with capital phosphate on an individual basis. 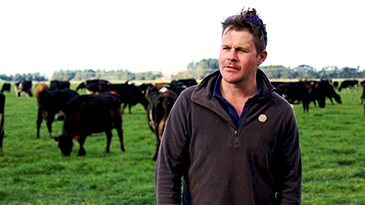