Twenty years ago, drawing water for truck-wash was a relatively straightforward exercise for Frew’s Transport, a livestock and trucking operation based in Darfield, Canterbury.

Today's operating environment is vastly different. Not only have the number of dairy farms increased in the area, but effluent is now classified as ‘industrial waste’ by Environment Canterbury (ECan). This has meant the original consent for 7,000 litres of water a day over five days would fall short of new consenting requirements for wastewater discharge when it came time for renewal. With its sizeable fleet of trucks, including 10 stock trucks split between Darfield and Oxford, this created a problem.  “Our consent wasn’t designed for the new dairy farming practices of the area, and with Mycoplasma bovis, we had to wash out more often,” says Chaz Frew, Transport Manager for Frew’s Construction. “It was all about our water use … we had to look to find an alternative.”

That alternative needed to meet water-take consent requirements of 15,000 litres a day over seven days, a considerable decrease from the average 23,000 litres a day the company was using at the time. The potential worst-case scenario would have seen Frew’s carting 20,000 litres of wash off site every day. At a rough cost of $500 a day to do so, a shutdown would have been inevitable.

It was around the same time that ClearTech, the effluent treatment system created by Ravensdown and Lincoln University, was creating interest amongst dairy farmers as a yard wash and water recycling solution. It was suggested that the system could also be a viable solution for Frew’s truck-wash water issue – a suggestion that ClearTech Product Manager Carl Ahlfeld was able to bring to fruition following site visits and effluent and wastewater testing.

Once installed, one of the immediate advantages of ClearTech was the ability to integrate with Frew’s existing water-cleaning infrastructure, made up of three effluent disposal systems. Fresh water drawn from the town supply also reduced by an impressive 65%. But the big tick for ECan was ClearTech’s removal of 99.9% of E. coli from wastewater before it went to ground. This was a hugely important factor in an area with no septic water system.

The payback from the ClearTech installation came with a new consent granted in December 2020, allowing Frew’s to draw an additional 5,000 litres water on top of their existing 7,000 litres a day. Consent was also granted to discharge 15,000 litres a day and the total system is currently averaging 10,000-12,000 litres a day. “ClearTech’s allowed us to successfully get a new consent through its ability to treat [wastewater] and take all the nasties out before returning it to the ground,” says Chaz. “Without ClearTech we wouldn’t have got the consent.”

Not surprisingly, good news travels fast in the industry and Chaz says there’s been a bit of interest from transporters in the North Island about the system. “Looking at the road ahead, ClearTech’s ability to work with dairy farming and transport operations is enabling Frew’s to continue to refine the system and drive the business forward.”

Developed in conjunction with Lincoln University, Ravensdown’s ClearTech system uses a coagulant to bind colloidal particles together to settle them out from the water. This clarifying process reduces the environmental and safety risks linked with farm dairy and stock effluent by killing 99% of E. coli bacteria in the clarified water, reducing the effluent odour and the risk of phosphorus leaching from a farm’s dairy effluent applied to pasture. 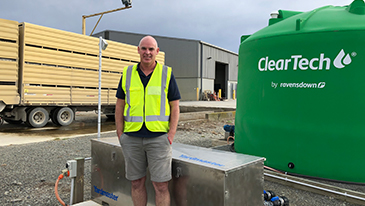