When you’re managing 6,000 effective hectares and 60,000 stock units over a wide range of hill and flat country, tools to help you farm smarter not harder are a welcome addition to the business. A team of 16 runs the three farms that make up the Wi Pere Trust’s agribusiness, which consists of two breeding farms and one finishing farm. The man who has led that team for 17 years is Tim Rhodes.

Originally from a Banks Peninsula farming family, Tim migrated to Gisborne 25 years ago and six years later was appointed the manager of Wi Pere Station, taking it through the ever-evolving nature of business and technology, and he says he’s loved every minute.

“Every time you master one operation something new comes along and you have to learn how to master that. It is that challenge, the people, and driving production off the land that has kept me interested over the years.”

“Our fert bill is rather large and I wanted to understand where the high and low fertility parts of the farm were so we could just fertilise the low fertility areas rather than spreading a blanket rate over the whole farm,”

Part of that evolution has been taking the farms from 40 to 200 paddocks. The sheep and beef business crosses Coopworth ewes with a composite terminal sire over a third of the flock and runs prime Angus Hereford beef cows. The farm also runs 100ha of cash crops (sweet corn, maize and squash), but the biggest focus of the business is lambs. With the progeny they breed and the 10,000 trade lambs they buy in, Tim says they are selling lambs to the works every week of the year.

“With our facial eczema tolerance now near bullet proof we’re focusing on lamb growth rates, which is why we got involved with Ravensdown’s PGP programme [Pioneering to Precision] of soil testing from the sky, and we’re trialling the offshoot technology of forecasting nitrogen applications.”

Every farmer has a fertiliser budget and Tim wanted to make sure his fertiliser was going in the right places. The reality of soil testing over 7,000 hectares to the level of detail Tim wanted would have taken him all year.

“Our fert bill is rather large and I wanted to understand where the high and low fertility parts of the farm were so we could just fertilise the low fertility areas rather than spreading a blanket rate over the whole farm,” Tim says. “Putting your fert on where you need it so you’re getting a higher return from your farm was the first goal, but secondly, from an environmental point of view, we wanted to make sure we weren’t putting it in any sensitive spots and also wanted to be able to hold the pilots to account as well as make sure we weren’t overdoing it, because what’s the point in having it leach out?"

“Market access is also really important to any business and we wanted to be able to show that we were doing things responsibly with proof.”

Once involved in the PGP programme, it got Tim thinking about what they could do with the technology beyond soil testing from the sky.

“We were looking to better utilise our nitrogen to get our lamb growth rates up. What I was looking for was the different response rates from the different aspects of the farm, which was basically driven by soil temperature, and the Ravensdown team had come up with N Forecaster, which allowed us to adjust our stocking rate according to the response rate they thought we would get.

“We knew the principles around where to apply nitrogen, but we didn’t have the ability to map to our farm to the level of detail we wanted to get to make some really big decisions. So, when I first become aware of Doug Mackenzie [another PGP research farmer] using the N Forecaster I thought, that is something we could do.

Although we harvested the grass a bit differently, we used the exact same principles.”

But they used the information differently. Doug consolidating higher N rates into smaller areas (areas with higher expected response) whereas Tim targeting a larger area and using the same rate of N but adjusted stocking rate to match the expected differences in the response to applied N. This showed the versatility of the N forecaster tool with both approaches ultimately aimed at achieving better N use efficiency by pasture and ultimately improved stock performance.

The tried and true principles of old remained the same, such as nitrogen responding quicker on northern country where it is a bit warmer. Where the N Forecaster added value was the mapping system that made it really easy for Tim to remove the guessing involved in applying nitrogen across Wi Pere farm’s contours and aspects, and then set his stocking rates accordingly for lambing.

“The reason it is so useful is that once you set your stock rates with lambing you can’t move them. Knowing what the difference in the N response rate was allowed me to get the stock rates right from the start – matching to the demand.”

“I have no doubt in my mind that the lambs were way better as a result of using the model, with no tail enders (‘rats and mice’) like we usually have at the end of the season.”

Due to the market being pretty good at the time, Tim knew the lambs were going to be worth a bit more so he was able to keep the rate of N at 46kg per hectare and adjust his stocking rate as per the N Forecaster.

Tim matched the supply of dry matter (DM) to the need, ranging from 19kg DM per day up to 30kg. The difference between

“With the N Forecaster insights, we had a 40% difference in stocking rate between our high and low response paddocks, with the triplets and twins on the highest response rate paddocks.”

Tim says before N Forecaster they would have used a little bit of historical knowledge and shuffled ewes between paddocks during lambing when they saw they were getting a bit short.

“We still do that but nowhere near to the same degree, which makes for much calmer ewes and lambs.

“We got it pretty right with only three out of the 80 paddocks wrong. You could do this without the tech, but you would never get it precise. We were able to get it to a practical level where we could get the differentials between response rates. It was so useful and has allowed us to lamb earlier this coming season.”

Tim’s lambs gained an extra kilo, which equated to about an extra

“The results we got last season has given us confidence to utilise our different land classes and change our demand profile, putting our rams out with our older ewes earlier and using the higher response paddocks so we can sell the ewes and lambs earlier while the market is at a premium. Then that paddock is available for the incoming triplets.

“I have no doubt in my mind that the lambs were way better as a result of using the model, with no tail enders (‘rats and mice’) like we usually have at the end of the season.” 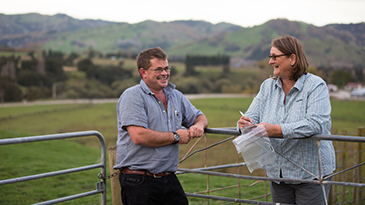