Glyphosate - one of the world’s most widely used herbicide

Glyphosate is the world’s most widely used broad-spectrum, non-selective herbicide for control of grass and broadleaf weeds. It has been used for over 40 years and recent rigorous studies by multiple international bodies have concluded that when used as per label directions glyphosate does not present an unreasonable risk of adverse effects to humans, wildlife or the environment.

Due to the short plant-back period, glyphosate is most popular for spray-outs before establishing a new crop or pasture. It also has approvals in New Zealand for general weed control, pre-harvest desiccation of crops including sileage and cereals, aquatic weed control and in forestry operations, orchards and vineyards.
The use of glyphosate has been transformative for the agriculture industry as an efficient and cost-effective tool to safely control problematic weeds before sow-out. Eliminating weed competition and getting a clean seed bed is important to give young pastures and crops their best shot at establishment.

While glyphosate is an effective control option for a wide range of weeds, there are some that it won’t knock down. In a spray-out situation we advise using a companion herbicide to tidy up any weeds that glyphosate misses. This has an added advantage of delaying the onset of herbicide resistance for some weeds. It’s true that resistance has more often occurred overseas than in New Zealand, but this proves that it can happen and its best to take measures to prevent it from becoming a problem here.
Choosing a companion herbicide depends on what weeds need to be controlled and the suitability relative to the crop being sown, for instance the residual activity of some herbicides means the plant-back period required is not practical for some crops. We also recommend using a good quality penetrant, such as Accelerate™, for effective weed control.

Ravensdown has two liquid forms of glyphosate. Glyphosate G360™ is a traditional 360g/L strength product, with the surfactant Surfmax-360™. Glyphosate 540™ is a high-strength 540g/L glyphosate, with the surfactant Surfmax-G®. The higher strength Glyphosate 540 lets you spray a larger area with the same amount of product. This means less product to store and less drums to recycle. Both these liquid forms of glyphosate only trigger a hazard classification for aquatic organisms.
This spring season, Ravensdown is adding a higher strength dry glyphosate formula to the range. Glyphosate 680 Dry™ is a granular form of glyphosate that readily dissolves in water. Being a higher-strength product there is less product to transport and store and it is a more efficient way of delivering glyphosate. For instance, a 10kg pack will treat the same area as a 20L pack of Glyphosate G360. While it is more accurate to weigh the required amount of product, there is an easy to use guide on the side of the box which lets you measure out the soluble granules with a standard measuring jug.

All plastic containers for Ravensdown Agrochemical or Animal Health products can be recycled through the AgRecovery program with no charge to the farmer or grower. This includes the larger 200L and 1000L drums. 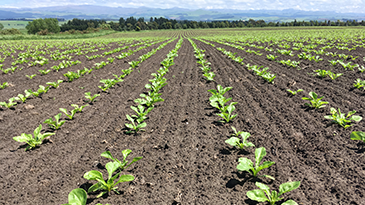