Help your clovers reach their potential

With the N-190 cap  in play now’s the time to ensure your clovers reach their potential. Molybdenum (Mo) is a trace element that plays an integral part in ensuring clovers can both fix and cycle nitrogen (N) optimally.

Mo has an important role to play when it comes to clover and nitrogen fixation. For many years it’s been a key component in all areas of pasture production, primarily for boosting the clover pasture base. However, with N restrictions in place, it is important that dairy farmers in areas where soils are known to be deficient or insufficient in Mo supply reassess whether Mo deficiency is limiting clover production.

Why do we need Molybdenum?

Molybdenum (Mo) is an essential trace nutrient for both plants and animals. While animal deficiencies of Mo are unheard of, plant deficiencies are relatively common. As Mo is important for biological N fixation, legumes are most affected by Mo deficiencies in soil.

Mo is important for two plant enzymes: nitrogenase (involved in nitrogen fixation) and nitrate reductase (converts nitrate to amino acids and protein). These enzymes are both involved in plant N-cycling which means the Mo deficiency symptoms are very similar to those of N deficiency: stunted growth and pale green leaves which eventually wither.

What affects the uptake of Mo?

Trace element deficiencies are often associated with specific soil types due to parent material and soil forming processes. In the 1950s, deficiency was found to be widespread throughout the South Island, particularly on soils formed from greywacke, loess and alluvium, as well as isolated areas in the North Island. When the initial trials were carried out in the 1950s, farmland was under development and many soils had low pH, responding strongly to Mo application. Today, responses are tempered due to the wide use of Mo along with liming to raise soil pH.

Soil pH is an important factor as soil Mo deficiencies can occur in acidic soils (pH lower than 5.5) where the Mo (an anion) is bound more tightly to the soil colloids. Liming can sometimes overcome Mo deficiency as the availability of Mo to plants increases as soil pH increases. However, if the soil does not naturally contain much Mo, Mo applied as fertiliser (e.g. Molybdenum-coated, mixed or sprayed on superphosphate) will be required. On many soils, a Mo response is unlikely above pH 6.0. Some soil types, particularly in the South Island, may have an absolute Mo deficiency and require Mo irrespective of soil pH.

Mo is more available under high soil moisture than under dry conditions. Moisture is probably the main reason for seasonal changes in pasture Mo concentrations on many soils. Trials have shown Mo concentration to be at a maximum in late winter-early spring, falling during the summer to a minimum in February-March and then rising again. This seasonal variation must be considered when pasture Mo concentration is used for diagnosis. Samples should not be collected when soil is very wet or very dry.

How do we test for Mo?

To test for Mo deficiency clover-only samples are required.

To correct Mo deficiencies, sodium molybdate can be added to fertilisers such as superphosphate and applied at 50-100g/ha. Samples should be taken in the following summer to ensure Mo concentrations have been elevated to correct levels. A maintenance application of 50g/ha sodium molybdate can subsequently be applied every four to five years.

Animals with high Mo intakes and adequate levels of sulphur can have low levels of copper absorption, causing induced copper deficiencies in stock. This is of particular concern on peaty soils such as those in the Waikato. To avoid Mo induced copper deficiency, mixed pasture samples should also be analysed for copper and molybdenum  levels - if they are low or marginal and Mo levels exceed 1 mg/kg, then copper supplementation in the form of fertiliser copper or animal treatments such as copper drench, needles or injection are required. However, where herbage Mo levels are low (i.e., less than 0.5mg/kg), application of Mo at recommended rates will not elevate herbage Mo to levels associated with copper deficiency in animals.

Getting your moly on

A common way to supplement pastures with Mo is by application of a top dressing with molybdenum superphosphate. In 2016, Ravensdown opened Australasia’s first Precision Blending Plant (PBP) to ensure precise mixing and coating of fertiliser compounds for a greater uniformity of the fertiliser products. Trace elements are applied at very small quantities – for example sodium molybdate (40% molybdenum) is typically applied at 62.5g per hectare – so ensuring an even spread over 1ha is difficult.

When manufacturing moly superphosphate (Ravensdown’s surflex moly) through the PBP, a trace element-infused polymer coating is applied to single superphosphate-based fertilisers. The polymer evenly coats the trace elements around the granule, improving distribution throughout the fertiliser and across the paddock surface. The technology improves trace element distribution and herbage uptake, increasing nutrient use efficiency and reducing physical consolidation and dust issues from the physical addition of the trace element compounds. Mo is also an expensive nutrient, so it is important to ensure the nutrient is going precisely where it is required.

In the 1950s Molybdenum (Mo) deficiency was first identified as an issue in New Zealand pastures. It was during this time at Invermay Research Centre in Dunedin that researchers sprayed molybdenum on a hillside in the shape of the letters ER II for the Queen’s visit.  Incidentally, the response to the molybdenum was so great that boot prints could be seen on untreated areas…perhaps ruining the aesthetic slightly? 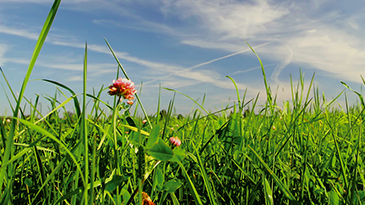