Integration of stock wellbeing and nutrition

It’s that time of year when we are again asking a lot of our stock. Lambing and calving can be stressful. If we don’t look after our stock, there can be flow on effects from health and wellbeing to performance.

Cows that are too fat or too thin are at increased risk of metabolic disease and should be managed as higher risk cows.

Feeding your stock is a large part of the job with dry matter intake and quality feed being the most important aspect of stock management. Often metabolic disease ‘outbreaks’ can be helped by increasing the amount of good quality feed and thereby the intake of energy, calcium and magnesium. However, integrating a holistic approach using general good husbandry with good feed and supplementation is proving to be more significant as research progresses.

Intricate links between a cow’s homeostatic (the regulation of the cow’s internal environment) and metabolic processes are being continually uncovered. Homeostasis is brought about by a natural resistance to change in optimal conditions and acts as an internal regulator to keep equilibriums (wellbeing), despite changes in the environment, diet, or level of activity. For a cows’ metabolism to work at maximum efficiency it needs effective homeostatic control to keep things balanced. Without it, a failure of one metabolic process impacts on the efficiency of others and the cow becomes vulnerable to external threats and stresses.

Because of the influence of the homeostatic system, the concept of transition feeding prior to calving has evolved. Rather than focusing on the control of milk fever alone, the process has taken an integrated nutritional approach that optimises:

Developing integrated strategies, based on an understanding of the homoeostatic process, will have substantial benefits to a cow’s wellbeing pre and post calving. That transition period represents a brief but critically important period in a cow’s life where careful manipulation of diet can impact substantially on subsequent health and productivity.

Along with nutrition, managing other influencing factors will have an effect on the cow’s homeostatic system and consequent ability to absorb and retain nutrients at critical periods. Things to manage are stresses caused from:

For example, while cows do not have the ability to store magnesium, requiring a daily adequate intake, the efficiency with which the animal absorbs magnesium is strongly influenced by the concentration of potassium (K) in the diet. To get optimal absorption requires a well-functioning homeostatic system. Calcium levels are also controlled by a very complex hormone system.

Simply put, milk fever occurs when this hormone system doesn’t work properly or fast enough. It effects on average 5-10% of New Zealand dairy cows annually, with most cases occurring within 24-48 hours of calving (Dairy NZ). Like everything, the balance of the hormone system and calcium levels is controlled by the homeostatic system. So optimal conditions and diet are critical to give your girls the best start to the season. 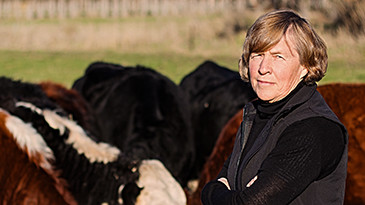 Know what’s under the surface with Precision Nutrient Management