Canterbury dairy farming operation Camden Farms have been focusing on lowering their nitrogen (N) use ahead of the N-190 nitrogen cap that came into effect in July 2021. Camden Group General Manager Terry Kilday oversees the group's six Canterbury dairy and dairy support farms. He talks to Ravensdown about their farming philosophy and putting actions into place on one of their properties, an 800-cow, 214ha effective unit at Bankside, near Dunsandel.

When referring to N use on farm, the team at Camden Dairy Farms Limited know what they are trying to achieve. Their farming philosophy is measure, monitor and manage – a concept that infiltrates their management across all facets of their operation.

Camden Farm was one of the early dairy conversions in the area, converted from dryland sheep in 1994. It’s a reasonably easy-managed system-three dairy farm, with four full-time equivalent staff milking through a new 54-bail rotary shed. The soil is stony silt loam but over the course of the last 25 years the organic matter has developed and the soils now have good water-holding capacity.

The protection of the soil is something Terry refers to often. “Soil type is probably one of the biggest limiting factors,” he says. “It has to be managed carefully so we're not intensifying areas at the wrong times of the year. When the cows come back onto the platform on 20 July, we've already allocated them the paddocks that weren't grazed in the last rotation. They come back to paddocks with high covers so we can feed them really well and not run the risk of doing damage to the pasture, and we also have forage crop on farm for the later calving cows."

They aim to produce 18tDM/ha of pasture, topping up with 500 kg/ha of grass silage in the shoulder periods. This year they have managed to keep it down to 372 kg/ha. The way they use N fertiliser hasn’t changed, just the amount they use. “We've always been believers in ‘measure, monitor, manage’,” says Terry. “You've got to do each of those things – one follows on from the other.”

They changed to Whole Farm Soil Testing (WFST) in 2016 following advice from their Ravensdown Senior Agri Manager Sonya Perkin who has worked with the Camden Group for 11 years. While they took a bit of convincing initially, the collective benefits gained from WFST have been immeasurable. Terry says WFST information allows them to design a good fertiliser plan to make sure all paddocks are at the optimum levels.

“We were worried that it was going to cost us more, but the reality is it probably saves us money because we're not putting phosphate fertilisers on paddocks that already have the optimum P levels. We're not chasing pH just because we think we need lime … we actually know what we need, so we can apply it accurately and at the right times. When we apply nitrogen, we know it’s being utilised. There are no limiting factors in the soil or in the pasture that will prevent pasture from taking it up and using it effectively.”

Sonya says whole farm soil testing has been huge for the Camden Group. “I could really see the need for it because otherwise you're just making assumptions off about six soil tests on a dairy farm. This farm was already close to optimal when we tested, but some of the newer farms we've done quite a bit of work on.”

They have dropped their total N use from 230kgN/ha back to 174kgN/ha and have tweaked some of their grazing strategies. Terry says it's been reassuring to see they’ve still grown a similar amount of pasture as in the past. “Dare I say it, it’s been a reasonably easy transition for us because we weren't big users of N before, so cutting it back was relatively easy to do. The hardest bit was having confidence that we were still going to produce the pasture, which we've proven to do.”

They do one N application per paddock monthly and have a policy of not following cows to ensure their N application paddock round-lengths are at least a month long. They set an N limit for the farm managers to apply each month, allowing them to follow their own plans for the individual operations. They also use other products, including coated urea.

“We use N-Protect through hot periods if we think we're not going to be able to water the fertiliser on as quickly as we'd like,” says Terry. “We can put it on the ground and know it's not going to volatilize ... once we get water on it's going to go into the soil where the plant can actually use it.”

They use Ravensdown’s online monitoring system HawkEye to record their fertiliser placements, loading the nutrient information at the start of the season so the team can order up to the limits set in the program. Once ordered, the information is sent to their preferred supplier spreader, and they have peace of mind knowing the truck will only spread the required amount in the chosen areas. It also means they can't double up in any given month. “From our point-of-view, it's relatively easy to achieve [the N-190 cap] because all we need to do is make sure the right information is loaded into the system,” Terry says.

Camden Farm’s centre pivot and sprinkler irrigation system has been designed around soil type with flexibility for both water and effluent application in mind. They use Aquaflex strips for soil moisture monitoring to ensure they are putting on the right amounts of water at the right time. The irrigation system was updated following a devastating windstorm in 2013 that destroyed 90% of the farm’s shelter belts. “We've put on what we believe to be the most efficient irrigation systems for this particular farm, because we've got very good control of how much we put on at any given time,” says Terry. "We can put on smaller amounts more often to keep the soil moisture level under field capacity to avoid leaching, and above wilting point to achieve optimum pasture production."

Effluent is captured and pumped out in two different ways – a small traveling irrigator, which can be put in a set location around the farm and moved at any time, used mainly in the shoulder periods. They also send effluent out to different portions of the pivot. “We keep very detailed information about when it's going out and where exactly it's going. And because of that, we can differentiate from where we're putting any other nitrogen across the farm, ensuring the target effluent areas don't get as much nitrogen as non-effluent areas.”

A few years back, they experienced diminishing pasture production as a result of invasive grasses and weeds re-establishing in the pasture swards. Clover root weevil had also decimated the clover, so they embarked on an ambitious plan to regrass throughout the group. “We wanted to do a third of each [farm] every year to try to cover the whole lot,” says Terry. “We didn't quite hold our nerve with that, but we still managed to turn over 85% of each farm in four years. Our target was to put in new, better varieties of ryegrass along with good, strong white clovers.”

They work closely with drilling contractors, using a machine that drills the ryegrass and broadcasts clover seed behind. “We're placing the white clover between the drill rows, which means it’s not having to compete when it's striking. It's able to get up and established. “Broadcasting clover between drill rows helps stop other invasive weeds coming in as well and we’ve achieved renovation with minimal sprays, just making sure we get a really good kill with the initial spray-out.”

What’s next for the Camden Group?

One of the areas the Camden Group will tackle next is greenhouse gases (GHGs). “We are already measuring those now but until we see some guidelines at a government level, then we're not going to know what targets we're reaching for,” Terry says. “We'll give ourselves some benchmarks, and then look at strategies around trying to lower them if required, but we do lots of other little things that are not just environmentally sound, but give us a good social licence to farm. If we do occasionally have dead stock, they are removed off farm immediately, and all rubbish is too.”

As for reaching N-190 targets, Terry reiterates the importance of planning as the starting point for managing N use. “To have a plan, you need to know a bit of background about what's happening on your farm. If you measure, monitor, manage – you measure what's going on in your soil and you make sure that everything else that’s required to grow a good, healthy pasture is as it should be, then from there you can put together a good fertiliser plan.

“At the end of the day, we're trying to match feed supply with feed demand. If you can get that through good strategies around grazing and nitrogen application, then you're going to win clear enough.”

Tips to lower N use 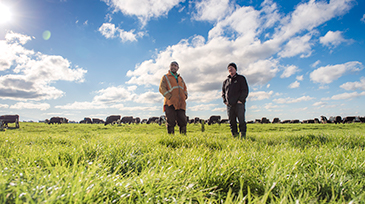