N Protect – buy yourself some time.

Sharemilker Adam Williamson recently switched to N-Protect as part of meeting his commitments in Synlait’s Lead with Pride programme. The programme’s four pillars of best practice cover environment, milk quality, animal health and social responsibility, with a recent addition of emissions reductions, which has been a key driver in Adam’s decision to switch from urea to N-Protect in the shoulder seasons.

Based in Culverden, North Canterbury, the family dairy farm milks 554 cows (peak) on 168 hectares (3.5 cows per hectare) of fully irrigated land. The decision to switch was easy for Adam as it worked with the farm’s nutrient and greenhouse gas plans and it was the right thing to do.

“N-Protect ticks both boxes in reducing the amount of nitrogen applied (whilst increasing production) and mitigating our greenhouse gas emissions while helping us meet the new requirements in the Lead with Pride programme.”

From a sustainability perspective, N-Protect has enabled Adam to be more economically viable while environmentally mindful by reducing the risk of N-loss by up to 50% if 10mm of water doesn’t fall within eight hours.

“Last milking season was our first-time using N-Protect and from a production point of view it has allowed us to produce more while using less N,” Adam says.

“We were able to decrease our N use from 230kg to 215kg of N per hectare and buy in half the feed while producing 250,000kg of milk solids, which is close to our production record.”

With the nitrogen cap of 190kg of N per hectare coming into play in July next year, Adam is mindful of the need to further reduce and mitigate his inputs.

“N use isn’t going to get easier, but mitigation goes hand-in-hand with production, so the nutrient efficiency needs to result in profitability. N-Protect has allowed us to do that by producing more from less, ticking our enviro box, our supplier’s box and our business box – it pays its way.”

The plan to get further reductions this season is to use more N-Protect than urea, which means Adam can use 10% less N and where the season permits stop applying nitrogen sooner.

“Our Agri Manager Cherie has done our nutrient budget, which gets us to 188kg of N per hectare. As long as the irrigation remains available, we have more mitigation options and flexibility with using N-Protect instead of urea because we know it’s going to get enough water (10mm) in the required timeframe (72 hours).”

The efficiency gains in growing grass with N-Protect also makes application management easier allowing Adam to control when he applies rather than the weather dictate when. This means he gets N on three days before the cow’s graze, so the grass is growing at the right time during his grazing cycle. 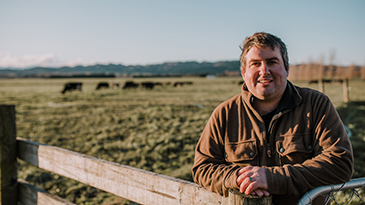