As you relax with your craft beer during the holiday season, have you ever wondered where the hops in that beer come from and how they are grown?

Hops are notoriously tricky to produce, with high demands on soil nutrients, and requiring an exact climate. Nestled at the top of the South Island you’ll find an agricultural industry that’s punching well above its weight.

Five Hop Facts - did you know?

Unique to the Nelson area, hops are a highly sought-after product both here and overseas thanks to the craft beer industry boom, says local hop grower Dean Palmer.

The 18 hop farms in Motueka contribute an impressive $15 million to New Zealand’s economy annually, exporting 80% and supplying 20% domestically. With a myriad of prizes and innovations, the New Zealand hop industry is well established on the international beer scene, but what happens behind the farm gate to attract such prestige?

“The hop-growing fraternity is very progressive,” says Chris Wratt, Ravensdown Agri Manager, “They have to be really, because of the way the crop is harvested. The whole plant needs to be chopped down and so the growers essentially need to start from scratch each season to replace the soil nutrients.”

Hop grower Dean Palmer considers himself new to the industry after eight years and says it has been a steep learning curve.

“I learnt very quickly the importance of water and fertiliser; everything I know about fert I learnt from other growers and Chris our Ravensdown rep. Hops are quite a latitude-sensitive crop, if you look at all the hop growing areas in the world they’re all within the 40-48 degrees latitude because of the long growing days, which is why Nelson is so good.”

With the temperate climate, sheltered from the wind, hops start growing in late September and hit their growth spurt by December, where they shoot to the top of the five metre canopy and are ready to harvest late February and March.

Dean says the bine training process in October is a delicate balancing act. “There are sometimes hundreds of bines produced by each plant and you’ve got to select six to eight of the best bines to grow up the wires. You want ones that are aggressive enough to get right to the top and produce a good crop but won’t be so big they block the light and are too difficult to harvest.”

Of significance to the hop industry, is how they manage their way around the mineral transfer process.

“Cutting down the plant means you take away the organic return of nutrients to the soil through the mulching process,” Chris says.

With a plant that needs to grow five metres high, the plant needs all the nutrients it can get. That’s why hop farmers need so much fertiliser.

Dean applies fertiliser every two weeks in the spring and up to nine times a year on some blocks. He uses different brews of fertiliser specific to the farm which are determined from the extensive soil tests, historical and current analysis.

“We use tailored NPK fertiliser mixes and soil test on all our blocks annually, sometimes more if we think we’ve got a problem. In the winter we sit down with Chris and put together a plan, we tailor it every year tweaking and adjusting to get it as accurate as we can.”

Dean also farms four hectares organically and says Ravensdown does a lot of soil testing and comparison between the two plots. “When we’ve had problems, Chris has been really good, suggesting extra tests and doing analysis work.”

Analysis and tests, which are crucial to such a high-input system.

“Ravensdown have been helping with leaf tissue analysis for the past four years to determine whether the plant has got enough nutrients to reach its potential. They’re also helping the industry by analysing the whole plant after harvest, to measure the amount of nutrients the plant has removed from the ground, which will help us determine our fertiliser plans.”

Dean adds “The industry is mindful of the environment, so this kind of data is being collected with a view to the future.” 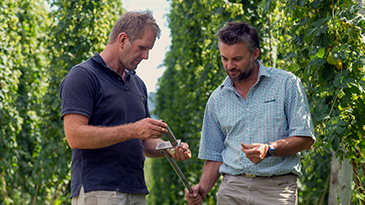