Regularly we read an article or hear a speaker that refers to ‘chemical fertilisers,’ which levels a series of connotations as to health, risk, pollution and ‘unnaturalness.’

Over my time in Federated Farmers, and as a farmer in general I have heard countless speakers talk in degrading terms about these ‘chemical fertilisers’ and the urgent need for us to embrace organics, or the new fad of Regenerative Agriculture. Biodynamics and other variations of the same concept have each had their time of promotion.

I’m an arable farmer, I grow crops and farm livestock in a continuous rotation. I grow food, food is known as ‘nutritious food,’ that being that it contains nutrients. It is the supply of those essential nutrients that allows your body to be nourished and perform the functions of a healthy body.

The wheat I grow contains approximately 2.5kg of Phosphorous per tonne of grain, about 1.3kg of Potassium and 1.5kg of Sulphur, along with a whole bunch of trace elements. In addition, it takes around 25kg of Nitrogen to grow a tonne of wheat.

So, for my 10 tonne per hectare crop of milling wheat that is made into flour to bake the toast you ate for breakfast, 25kg of Phosphorous, 13kg of Potassium and 15kg of Sulphur were removed from every hectare of that field. Removed, gone, permanently no longer there. Likewise, 250kg of Nitrogen was used to grow that crop. The nitrogen is the “gas in the tank” that powers the Photosynthetic process along with water, oxygen and sunlight and forms amino acid and protein: the building blocks of life. Nitrogen can and is held in the soil as organic matter, but as that organic matter breaks down into nitrate, it can leach, and if used by plants, it must be replaced.

Those basic elements left my field and were present in the toast you ate this morning. Your body will use them for the essential function of life and growth.

Where do those nutrients then go?

Well, they end up in a nearby Oxidation Pond prior to their flow into the ocean.

So, my paddock now has 25kg, 13kg & 15kg less P, K and S per hectare in it than was stored prior to the crop being harvested.

If we do not replace those nutrients, then the field has been depleted.

We learnt these concepts in maths in the Primmers. If you have a set, and you take something out of the set, you now have less in the set than you started. You can mix up the squares or triangles in the set as much as you like, but unless you put the same number of squares and triangles back into the set as you removed, you will always have less.

The soil and my paddock are no different. We can mulch the straw, we can graze animals, even on mixed swards of grasses, herbs or legumes, we can bury cow horns, we can direct drill, we could even dance naked on a moonlit night, but nothing will manufacture Phosphorous, Potassium, Sulphur or any of the other nutrients that had been removed by a previous crop.

We can spread manure or mulch from elsewhere to re-introduce nutrients, so long as we recognise that we are moving nutrients from one part of the farm or area to another. We are still not creating the nutrients that are now somewhere east of New Brighton Pier.

It is true that some farm practices, even those preferred by protagonists of Organics or ReGen can aid in the soil availability of nutrients, or move those nutrients up from deeper in the soil profile by way of tap roots, but we still have not re-introduced nutrients removed into the soil, so ultimately the soil is being mined, or depleted. Some management practices merely delay that process briefly.

Without an external source of nutrients, the only way you can actually run a truly ‘closed loop’ is for the contents of those ponds to be spread back on the area where the food was grown. That essentially is what occurs in subsistence village living.

But we don’t have that anymore, we have cities, or ‘human feedlots.’

So where does fertiliser fit into all of this?

Fertiliser is the concentrated supply of a particular nutrient. Phosphorous is sourced from Phosphate Rock. Potassium is generally mined as Potassium Chloride, which is the dried salts of historic ocean beds. Sulphur is generally recovered as a by-product of the oil and gas industries, and nitrogen fertiliser is a combination Natural Gas and Nitrogen from the atmosphere.

As food growers, fertiliser gives us the ability to replace the same amounts of the nutrient that was removed in the food that left our field.

To date, there is currently no other time or cost-efficient method of replacing those nutrients. Even if we disregarded any time or cost constraint, other agronomic measures promoted only move nutrient from one location to another. Depleting one area to enhance another.

It’s a basic concept, in which we must remember the basics of sets taught many years ago in the Primmers.

These basic principles of life, nutrition, and crop growth get lost when folk start throwing around emotive terms such as ‘chemical fertiliser.’

David Clark is Provincial President of Mid Canterbury Federated Farmers, a position he has held since 2019, and from which he will step down in May. He has held numerous roles in Federated Farmers since 2005. Along with his wife Jayne and parents Pam and Terry, David farms a 463 hectare arable and lamb finishing property at Valetta, west of Ashburton, which they have held since 1994 after shifting from South Auckland. 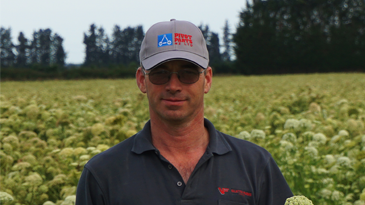