Farmers won’t be the only ones impacted by Ravensdown’s Primary Growth Partnership (PGP) programme focused on transforming hill country farms through the precision application of fertiliser.

Ravensdown Aerowork pilot Grant Lennox is helping put the theory into practice by trialling the new prototype which he believes will become an expected feature on all aerial topdressing aircraft in the future.

“The automated application of fertiliser is much more effective even in this early stage. I know that I am doing a better job so I am getting more satisfaction out of my work,” Lennox says.

“With the inclusion of prescription mapping which highlights the nutrient needs from a fertiliser plan for the farm, I can go to a client and they can have the boundary and spread areas already mapped out and programmed into the GPS before I arrive. This means I can fly backwards and forwards over the target area and know that the land is getting the right amount of fertiliser per hectare.”

Today’s aerial spreading techniques of broadcast application or blanket coverage are not always as accurate as they need to be – leading to higher costs, lower levels of production and potential impacts on the environment.

Fertiliser is currently dropped via a manual hopper door that is controlled by the pilot but Lennox says there is no way of ensuring the fertiliser has landed on the targeted area.

Recent innovations in remote sensing and imaging mean that the potential for sensing parameters from the air has vastly improved. Hyperspectral cameras are a key part of providing the information which will enable a quicker and cheaper way to assess the nutrient status of farms. Ravensdown Technical Development Manager Michael White says the PGP project presents a transformational change in the way fertiliser is applied and responds on hill country farms.

“Fertiliser is a major investment for sheep and beef farmers so it’s important for farmers to get the maximum benefit from their investment in nutrients so they can capture that benefit on farms,” he said.

Prescription mapping assists in the process of making it much easier for pilots to disperse the right amount of fertiliser via the automated system over rolling hills and on more complex terrain.

Lennox says another benefit of programming buffer zones into an aircraft’s Global Positioning System (GPS) is that it reduces the risk of environmental impacts such as fertiliser getting into a neighbouring waterway.

“I’m finding that farmers are pleasantly surprised by how easy it is to create a prescription map outlining where they want fertiliser to be distributed on their land. Farmers can identify blocks instead of relying on a pilot to visualise the fence lines and remembering where they should and shouldn’t go. It’s a win-win for everyone.”

Lennox has been trialling the automated system for the past 10 months and believes there could be a potential to use less fertiliser in the future.

“The idea of saving on fertiliser will obviously be a draw card for farmers but I think one of the biggest benefits is being able to put the right amount of fertiliser where you want it rather than blanket coverage,” he said.

“The mechanical side of the trial is working very well and the next step is to continue the development of the software to ensure the reliability and accuracy of the system.”

Lennox says the trial is still in an experimental phase but has confidence in the new technology.

As this is a prototype, we are constantly assessing progress and making small improvements as the trial continues,” he said.

The Pioneering to Precision PGP - a partnership between MPI and Ravensdown and involves Massey University and AgResearch as lead research providers - is a seven-year programme that aims to improve hill country sheep and beef farming productivity, while protecting the environment through the precision application of fertiliser.

Two students at Massey University are completing their PhD's as part of the research associated with the project and a further two PhD students are yet to be appointed. A third student is completing a Masters of Philosophy (Science) which is associated with a research project funded by Ravensdown. 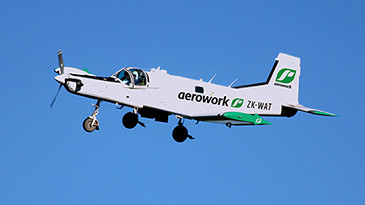