A 2017 trial on perennial ryegrass-white clover pasture at Lincoln University’s Research Dairy Farm has shown some impressive gains in the plant's uptake of copper (Cu) as well as its consistency in the spread.

Dr Ants Roberts, Chief Scientific Officer at Ravensdown, who has worked in trace element research says “In certain areas of New Zealand there is a long history of trace element deficiencies in crops, pastures and animals, which is why these trial results are so significant.

Essentially, the trial has shown that the plant is getting more copper from the same amount applied, by coating each fertiliser granule with a copper polymer rather than mixing it in as crystals. The trace element is also more evenly distributed across the paddock as each granule has copper on it, meaning stock will be getting a more even supply of copper in their diet. It’s peace of mind for the farmer.”

The trial consisted of three copper treatments with superphosphate, replicated 17 times, in a randomised block design. The treatments were all applied at 40kg P/ha where the trace elements were either combined in a polymer-coating (Surflex) to the main fertiliser or mixed as copper sulphate crystals as per current practice.

Over six months, the pasture was mown down to 1600kg DM/ha at each harvest to simulate a grazing event. Pasture herbage harvested for each plot was weighed for dry matter (DM) yield and a sample dried at 60oC for DM percent before being sent off for herbage analysis at ARL.

It’s the same principle as a mix of peanuts and chocolate chip, the amount of chocolate you get will vary with each handful eaten, however with chocolate coated peanuts, you get the same amount of chocolate on each peanut, with the benefit of less crumbs/waste. Using our Precision Blending Plant in Christchurch, the whole system is automated increasing the accuracy and speed of coating each granule of superphosphate.

"For farmers applying fertiliser in autumn, this new Surflex product range is going to give them greater confidence that their stock is getting the right amount of copper in their diet. Like all things that involve trace elements, there are other contributing factors to copper availability such as molybdenum, but at least we can now ensure that pasture is getting a more even spread of copper.”

Other benefits observed from the trial were environmental due to less dust, with a reduction in the potential of product drift when aerially spread, and health and safety for people handling and loading the product. 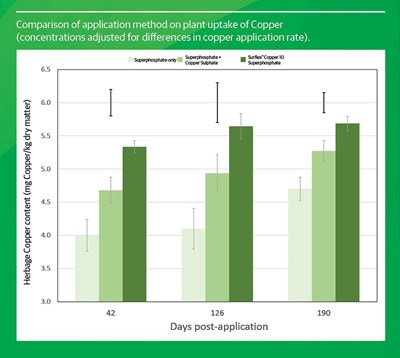 Comparison of application method on plant uptake of Copper. 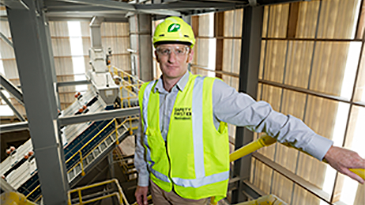 How much copper is enough for deer?