The soils behind our pastoral system are one of the country’s most important assets.

Over $44 billion a year depends on what’s going on within New Zealand soil. According to Mike White, Ravensdown’s Technical Development Manager, a more precise approach is the key to getting the most from this precious resource.

According to Statistics New Zealand, farmland under pasture amounts to over 100,000 square kilometres of our total land area. So if all of NZ Inc’s pasture was joined together in one giant farm, that grassland would be the size of Cuba, Iceland or South Korea.

The land which is so important to our current and future generations is immense and of course it’s also hilly. But the sixty-four thousand export dollar question is not so much ‘how much land is available?’ The real question is: ‘how large are the effective areas on these farms that should be targeted for sustainable growth?’

Gullies, trees and bush, steep slopes prone to erosion and farm infrastructure take a chunk out of the total effective farm area. And of course areas that are environmentally or culturally sensitive are also a no-go.

Across hill country farms, discerning the fertility status and thereby better quantifying the potential response of productive land to applied nutrients has been problematic to say the least.

But Ravensdown’s Primary Growth Partnership programme, which is co-funded by the Ministry for Primary Industries, is making great strides on this challenge. The idea from the outset is that moving from largely blanket fertiliser spreading to more precisely targeted aerial application has the potential to transform New Zealand hill country farming.

Computer-controlled doors on Ravensdown’s topdressing aircraft, which automatically open and close according to a pre-loaded map and GPS co-ordinates, have now been tested on over 40 farms.

Nearly a tenth of all the land on those farms turned out to be ineffective or sensitive. Blanket fertiliser applied on these parts would have been wasted or cause environmental stress.

A desktop study showed that employing the more precise aerial approach represented an average $43/ha gain compared to blanket coverage. The environmental gains are harder to calculate, but no less important.

While it’s early days, the redeployment of hill country farmers’ fertiliser investment using this new more precise technology would amount to hundreds of millions of dollars.

This kind of innovation is a three-way win for New Zealand Inc in terms of profitability, sustainability and pilot safety. More data and time will show exactly how much of a win. 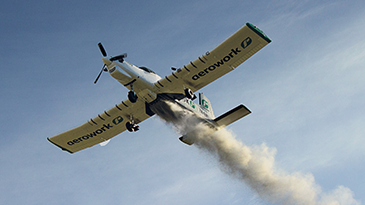