Intentionally reducing the amount of feed eaten might feel counter-intuitive to most farmers aiming to preserve or grow their farm’s profitability.

But when you’re dealing with limits on nitrogen fertiliser use and meeting the Government’s target of carbon neutrality by 2050, it begins to make sense.

AgFirst consultant Phil Journeaux has been crunching numbers ahead of the next round of consultation with farmers and industry by the primary sector’s climate action partnership, He Waka Eke Noa.

The former Ministry for Primary Industries' policy manager has earned praise and respect from the farm consultancy sector for his modelling of different farm scenarios for dairy and sheep-beef farms, aiming to meet the reduction in emissions of methane and nitrous oxide expected from agriculture in the Zero Carbon Act.

Phil’s modelling exercise and resulting commentary has been a lifeline for the farm consultancy sector grappling with rising farmer enquiry for advice. He concedes there is a lot of work to be completed before the full road map to carbon neutrality is clear for the farming sector.

Big on He Waka Eke Noa’s work list for February will be consulting with farmers on recommendations it tabled last November for pricing farm emissions and recognising on-farm sequestration.

The goal for 2022 remains to get 100% of farmers and growers knowing their individual farm’s emissions profile as a starting point for future reductions and completing an individual farm environment plan.

Phil has led various modelling exercises over the past six years to investigate the impact of changes to the three biggest drivers of on-farm greenhouse gas (GHG) emissions – volume of dry matter eaten, the protein content of feed and the use of nitrogen fertiliser in farm systems.

Volume of dry matter eaten is easily the largest influencer of GHG emissions at farm level. Protein content of the feed consumed really only hits dairy farms that have supplemented diets. The higher the protein level in that feed, the more nitrous oxide is produced by the stock.

Nitrogen (N) fertiliser has long been regarded as the cheapest way of growing more pasture if needed, but the national cap on N-use comes into effect at the end of the 2021-22 dairy season, limiting farms to a maximum of 190kg/ha/year of N application. To exceed this cap, farmers will need a resource consent.

Phil encourages farmers to fine tune their feed budgeting skills to make smarter N application decisions and to use precision technology when applying N fertiliser to make sure it’s applied in exactly the right place.

Of course, reducing mouths can have unwanted side effects, including the impact on pasture quality and the resulting decreased production of meat, milk and fibre.

“If you want to reduce dry matter eaten, the immediate proxy is to reduce stocking rate. But the modelling shows that if you simply reduce your stocking rate, you have a rather adverse impact on farm profit.

“It varies wildly depending on the intensity of your farm. In our farm modelling exercise, if you drop your stocking rate by 10%, the drop in farm profit might be anything from -5 to -30%.”

Fortunately, there are ways to counter the drop in profitability.

He says the key driver here is the skill level of people managing those stock and their diet. Being able to manage pasture to maintain high quality feed with fewer mouths and reduce the requirement to use supplements is vital. “Of course, the animals also need to have the genetic merit to be able to lift in performance and have to be fed appropriately to achieve it as well,” he says.

He’s concerned that some farmers will struggle with the skills to deliver the same or higher profits. He notes that data from both DairyNZ and Beef + Lamb New Zealand already shows a big range of profitability across different farm types.

“A big reason for that (range in profitability) is the skill level of farm managers and farm owners.”

His modelling work did not include the impact of different pasture or forage options, like plantain or forage rapes, known to reduce GHG emissions from livestock. The difficulty for farmers is how to provide a high percentage of those methane reducing forages in the animals’ diet for long periods of the year.

“On the forage side, there’s not a lot of practical options. If you’re feeding say fodder beet over the winter to your cows and it’s 80% of their diet, then you will reduce GHG emissions, but it’s only for a short period of time.”

He is also concerned at the irony for farm owners who have made early decisions to reduce their carbon footprint because those ‘efficient’ farmers have fewer proven options to further reduce emissions inside their farm gate.

One likely option already showing promise is breeding low-methane producing rams and bulls for widespread use. Work to date suggests ram breeders will have low-methane rams on the market in two to three years and on average they should drop methane emissions by about 10%.

“Of course, there’s a lot of work happening in dairy to do the same thing. It’s a matter of when not if, but it could be another five years before we have a good pool of low methane bulls available for widespread use.

“And, we know that the more traits you select for, the slower the progress is in each one. How quickly you select for low methane will depend on the economic value of each trait and those values are not clear at this time.”

That aside, Phil says progress in genetics is a positive for the sector. He expects dairy farmers will be quick to add low-methane bulls when artificially inseminating their herds.

“And, once the scientists have identified the genetic marker or markers for low methane, it will happen for beef quickly too.”

That said, Phil says it would take a flock or herd owner nine years to get to 15/16ths low emission genetics starting from scratch.

“We don’t expect low-methane bulls to be available in good numbers for the dairy sector till 2026 or 2027, so by 2030, you’re only just getting started on achieving any reduction.”

Trees as an offset to GHG emissions from farm animals is where farmers, particularly sheep-beef farm owners, can make rapid progress towards the goal of carbon neutrality.

He’s firm in his view that farmers considering forestry as an offset should get expert advice.

Although more of an option for the sheep-beef sector than dairy, Phil says trees don’t have to be planted on a dairy farm – just anywhere in New Zealand – to be eligible as an offset.

He hopes He Waka Eke Noa will succeed in broadening the definition of forests in the Zero Carbon Act to include riparian strips and shelter belts, a welcome boost to farmers balancing their farms' emissions.

A concern is that under the Zero Carbon Act, farmers can only directly offset their nitrous oxide emissions with forestry sequestration. Methane is excluded.

Phil's advice to farmers seeking to balance their methane emissions is to plant trees, sell the credits and use that income to pay the methane tax.

“A lot of farmers won’t like that. But it is a solution. I’m not sure that’s what government intends either, but the issue for farmers is methane is 80% or more of their total emissions compared with nitrous oxide.”

Under current policy, the government intends to introduce an averaging scheme for claiming carbon credits in 2023. This allows farmers to claim half the carbon in the first round of a production forest.

If farmers plant pines, they can claim carbon credits for the first 16 years and they don’t have to repay those at harvest if they replant the forest.

“If you do nothing else but plant forestry to offset your carbon emissions, it means every 16 years you have to plant a new forest.

“If you have 50ha on your farm that could go into pines, you’d be better to plant 10ha every five years, so once through first rotation you’ve got a semi-regular harvest and that does amazing things to your profit and loss account.

“Farmers need to decide if they want to sell the credits for cash now or retain them and use them to offset emissions in the future – given the liability from their farm will increase.”

Phil says the current policy also supports moving to permanent forest, rather than a plant and harvest regime.

“But most farmers I talk to about permanent forest would rather plant natives than pines. The big issue there is the cost to establish natives is hideously expensive. “From a carbon perspective, you get about a quarter of the credits compared with pines, but natives truck on for hundreds of years.”

A big unknown is where the price of carbon credits will end up if New Zealand reaches carbon neutrality by 2050. Phil predicts the carbon price will rise further and force a change in emitter behaviour but drop as we get nearer to balancing emissions against sequestration.

He's concerned at the lack of analysis by government agencies from huge areas of the country being planted in pine trees.

“I’m saying trees on farms, not farms into trees,” he says.

“Trees have an obvious, important part to play. But they are really a short-term solution, more of a stop gap, while we develop other solutions such as vaccines, feed additives, or consider a role for gene engineering.” 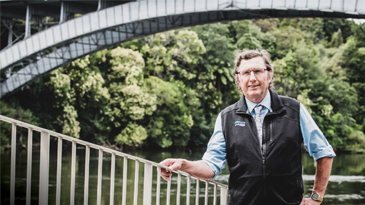 Published under Environment, The Experts

Super with nitrogen a proven performer