Ravensdown’s Primary Growth Partnership programme has been extended to cover more geographic areas with the aim that the research outputs will be valid for 90% of hill country in New Zealand.

The research involves aerial scanning of hill country farms combined with actual soil tests so a predictive model of soil fertility can be calibrated across the varied terrain. New additional funding has been made available by Ravensdown and the Ministry for Primary Industries on a 60:40 basis so that the North Canterbury and Southland regions can be modelled and tested.

The farmer-owned co-operative has committed to invest $564,000 to complete this additional work, with MPI investing $376,200.

This PGP programme, called Pioneering to Precision, and an aligned Ravensdown funded programme, which is investigating improved aerial spreading precision, is at the three-quarter mark on its seven-year journey. The special aerial camera used by the programme scans 1,000 hectares per hour. These ‘AirScans’ can be turned into a soil fertility map that directs a GPS-enabled topdressing aircraft with computer-controlled doors to deliver fertiliser where it’s needed, instead of where it’s not.

Of the farms using the aerial spreading precision service so far, the system ensured fertiliser was avoided for 14% of land either because it was ineffective, culturally sensitive or environmentally vulnerable. The technology also makes it safer for pilots and can be better for productivity and the environment.

When it comes to the aerial scanning of hill country, there will be some climate and soil differences which means you can’t necessarily take results from one part of the country and apply it to another,

“We’ve done a fair amount of calibrating actual soil results with modelled results across the east coast and central parts of the North Island, South Canterbury and Otago. While we wouldn’t expect the differences to be huge across many of these regions, it’s important to check,” added Mike.

Ravensdown is looking for farms in the newly-added areas who want to test their farm using the AirScan service.

"This additional funding and research extension is a great vote of confidence in the emerging technology, our management of this PGP programme, the promising results and relevance at a time when farming is tackling its environmental impact." 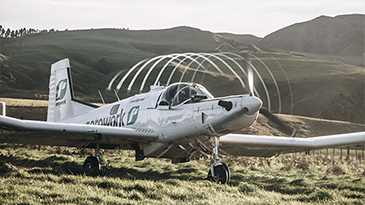