Ravensdown and Lincoln University in Canterbury unveiled a breakthrough effluent technology today (May 3) that could significantly lift the dairy sector’s effluent and water efficiency.

The pilot project, which is installed at the Lincoln University Demonstration Farm, is the result of detailed work and represents a $1.5 million investment to date by Ravensdown.

It is undergoing rigorous testing in the live farm environment, giving interested farmers a preview of the kind of technology that will be available in the future.

Jamie Thompson, Ravensdown’s effluent technology manager, said the emerging technology showed exciting potential to reduce the environmental impacts of effluent discharge on farms and to transform “green water” so that it can be confidently reused as yard wash.

“About a quarter of a dairy shed’s fresh water use is on yard washing, so the potential benefits to New Zealand are enormous of safely reusing ClearTech-treated water. ClearTech has the potential to save 42 billion litres of freshwater a year - the equivalent of 17,000 Olympic-sized swimming pools through the reuse of safer water for dairy yard washing.”

The new technology, which binds effluent particles together in order to settle them out from the water, is installed between the dairy shed and the effluent pond. ClearTech automatically monitors and treats effluent circulating in the system. The separation process kills up to 99% of microorganisms such as E. coli and reduces smell.

“We are really encouraged to see the willingness and desire to collaborate from dairy industry stakeholders as we engage with them in the development of ClearTech.”Ravensdown’s Chair John Henderson said dairy farmers he had talked with were determined to work together to tackle issues related to water use.

“This new technology is one important step that follows the sector’s commitment to continuous improvement in the sector and is a real example of why Ravensdown exists – to enable smarter farming for a better New Zealand.”

Colin Glass Chief Executive of Dairy Holdings Limited said, “This technology has the potential to transform the use of water in dairy operations and provides another tool for reducing nitrogen losses. As a shareholder, it makes sense Ravensdown is the driving force behind it because they are increasingly seen as nutrient efficiency specialists instead of being purely a fertiliser maker.” 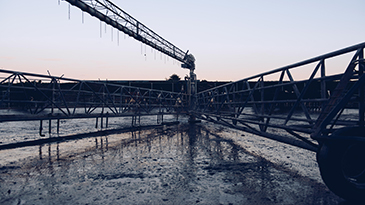