Reduce the need for frequent drenching

How do you reduce the effect of worms?

No one wants to have to drench stock more than necessary. Farmers have the opportunity to ensure parasites do not become the variable that controls their farming systems by wasting time and money on ineffective drenches through Faecal Egg Count testing (FEC) and Faecal Egg Count Reduction Testing (FECRT).

Taking a holistic approach to managing parasites inside and outside farm animals requires building an understanding of the complex principles in the worm-host interaction. Faecal Egg Count testing allows us to measure the effectiveness of drenches through parasite population. This gives us a more targeted approach to drenching, which helps delay resistance and reduces the frequency of drenching.

To run a Faecal Egg Count Reduction Test, a mob needs to be undrenched and monitored until egg counts reach a moderate level of 300-600 eggs per gram. Testing is then carried out at day 0, where the mob is divided into several smaller groups of 12, all treated with a different product.

Faecal samples are taken from each group to establish egg counts and the species of worms present. At day 10 all animals are then sampled individually and egg counts completed to identify the potential resistance to the product with which they were treated.

The egg count reduction is shown as a percentage, with results less than 95% requiring attention. If you are seeing results 90% and below you have a resistance problem and need to take action.

FECRTs are considered by many to be too expensive, however, traditional drenching practices will only ensure stock are worm free for a short time. Within a few days they will start accumulating new worm infections and eventually need to be brought back into the yards and drenched again. So the cost of testing can be negated by the reduction in frequency of drenching stock.

If you are struggling to get four weeks between drenches, then you need to look at reducing larval challenge on pastures. Central to any plan to reduce pasture larval challenges is to always use effective drenches, which can be determined through the FECRT.  Using ineffective drenches not only reduces the time it takes animals to build up worm burdens, it also increases the buildup of drench resistant parasites on pastures. 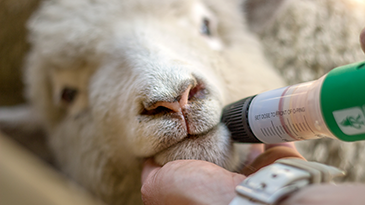