A well-known hill country station in the North Island, Tautane, is part of a joint research initiative to help increase production in the primary sector in New Zealand.

A map is sent wirelessly to the plane, specifying areas and blocks where no fertiliser should be applied. The computer-controlled hopper doors automatically cut the fertiliser flow when over those areas and the map produced verifies where the fertiliser has been released and, crucially, where it has not.

A recent field trial of Ravensdown’s PGP programme at Tautane produced a very promising variable-rate proof of placement map and has all those involved excited about the possibilities.

Tautane is an iconic 3374-hectare hill country station on the east coast of the North Island, owned by Ngāti Kahungunu. The iwi, in partnership with New Zealand’s largest agricultural training centre, Taratahi, signed on to the co-operative’s research farm network in 2014.

“Our ancestor Kahungunu was an innovator and forward thinker and so that’s where we want to be. We want to be sustainable and trade in the new world with sustainable practices. We’re for progress and Ravensdown’s PGP programme is putting Māori back into the forefront of farming and innovation.”

“Our first application using the technology allowed us to take out about 347 hectares of sensitive areas and waterways and reallocate that fertiliser to other parts of the farm. It was a super nitrogen mix, and you could see it definitely was going where it was supposed to go, which is going to have a huge beneficial impact on environmental sustainability.”

Hayden Hape, iwi liaison, works with Matt and his wife Claire and says it’s about combining western science with the iwi’s values.

“We say a good environment is good business. We have our own view of the world, which is pretty special, and we want to make sure those applications are up with current practice. If we can find current situations where western science supports our science and vice-versa then that’s where we want to be and we feel that Ravensdown’s research aligns with that.”

Matt says the sensor’s ability to aerial soil test down to the square metre and variable rate spread to 40 square metres with proof of placement will transform hill country farming.

“It will have a massive impact in productivity and sustainability. We’ll be able to know for sure that we’re not putting any fertiliser on sensitive areas or waterways, with proof. It may cost a little bit more but I think the savings we’re going to make and ability to provide proof of placement is huge. We’ll be able to show that we, as farmers, are working to limit our environmental impact as well as being economically more efficient.”

Ngāhiwi says his iwi wants this technology to become commonplace right across all their whenua.

Ravensdown’s PGP programme is part of our ambition to take over all our land and show we can farm profitably and sustainably for future generations, whilst putting our cultural spin on modern-day farming. 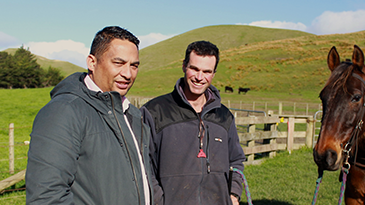 Wet soils a threat to farm production and environment