At one of the busiest times of the year, it pays to be on the front foot when it comes to getting your nitrogen on. And one of the ways farmers can do this is by considering smart fertilisers over traditional urea products.

I’ve been in the fertiliser spreading game for 28 years. And while nitrogen can be applied across the spring, summer and autumn months, there’s often a rush for urea applications as farmers look to give pastures a boost before winter.

Nearly all farmers know that traditional urea products are best to have at least 10mm of rain or irrigation within eight hours of application to reduce volatilisation effects. And for a ground spreader, the need for rainfall post-spreading can cause backlogs as everybody rings in wanting their urea spread at the same time.

The use of coated fertilisers like N-Protect can help avoid this backlog as they can be spread without the need for immediate rainfall, giving spreaders the ability to get the job done without remaining at the mercy of the weather forecast. Farmers also benefit from knowing that they can leave the spreaders to get on with the job without having to scan the sky for imminent rain or worry about whether the spreader will get to them before the heavens open.

Why the rain-dance for urea users?

Traditional urea products are best to have at least 10mm of rain or irrigation within eight hours of application to reduce volatilisation effects. This is vital so the uncoated urea granule can be moved into the soil rather than sitting on the surface, because that’s when it otherwise starts to shed some of its nitrogen into the atmosphere instead of being available for the plant.  Nobody wants this – it’s bad for the environment and bad for the bottom line – a lose-lose situation. And for those who know the cost of getting it wrong, this pressure can be stressful for farmers and frustrating for spreaders.

There is good news for those who need to get their N on and don’t want to watch every NIWA weather update with baited breath. Urea products like N-Protect have a urease inhibitor coating that slows the N-loss process, meaning it can be applied in conditions where losses of N through volatilisation can be reduced economically.

For spreaders like me, every autumn day is a logistical challenge of arranging a perfect match of driver, truck, product and farm. Safety, fuel and weather constraints such as high winds all have to be factored in.

Like farmers, a spreader’s life is complicated enough controlling the things I can control. So if there’s a choice between traditional, rain-dependent urea and innovations like N-Protect that help ease the weather headache, I know which I would prefer. For farmers and spreaders, it’s a win-win situation. 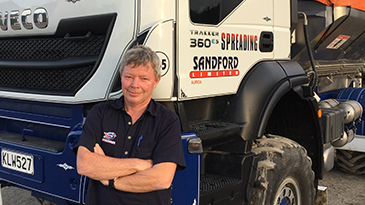