A new soil test option for measuring potentially mineralisable nitrogen (PMN) is making it easier for arable farmers to keep tabs on the amount of plant-available N in their soils for crop growth.

Not only does the PMN test have a faster turnaround time than previously available N tests, it is also more accurate than the predecessor AMN test and cheaper than the combined alternative tests.

The use of Ravensdown’s Nitrogen Mineralisation Calculator (see below) across common arable soil types and climatic conditions provides the ‘typical’ N release over four months after sampling, allowing easy and accurate interpretation of the test. The calculator’s ability to estimate the rate of mineralisation by month improves the application of the test for nitrogen decisions.

Why is measuring mineralisable N in soils important?

Good nitrogen management is key for productivity, profitability, and environmental outcomes. If there is too much N in the system, you’re not getting value for your money and excess N can end up in our waterways. Too little, and the crop can’t grow to its full potential.  Therefore, it is important that N requirements through supply are matched to crop demand as closely as possible. This helps ensure:

When soil organic matter is mineralised, it can supply 40-300kg N/ha/year. However, predicting soil mineral nitrogen supply can challenging. To ensure N is used efficiently, three key pieces of information are required.

Knowing these three pieces of information allows us to work out the right amount of N fertiliser to apply by a simple calculation: fertiliser N required = crop N demand – (mineral N + mineralisable N).

A mineral N test measures the combined amount of nitrate and ammonium (the forms of N taken up by plants) in a soil sample. Mineral N testing is commonly recommended to growers to estimate the amount of plant available N at the start of the growing season. Soil samples for mineral N testing are commonly taken to a depth of 60 cm or greater; however, the appropriate depth will depend on the rooting depth of the crop to be grown. In many cases, most of the mineral N that will be available to the next crop can be found in the top 30 cm of soil. o

When information on the soil mineral N content at sowing is combined with the PMN test, it allows us to estimate the soil’s potential to mineralise (provide) N over the growing season. With this information, we can strike the right balance of N fertiliser for optimal growth and minimal environmental impact.

The graph below illustrates the typical pattern for a spring-sown annual crop where soil N supply and crop N uptake does not align. Here the soil has supplied more mineral N in the early stages than is needed to meet crop demand, but N fertiliser is required in critical stages of crop development to achieve the target yield. 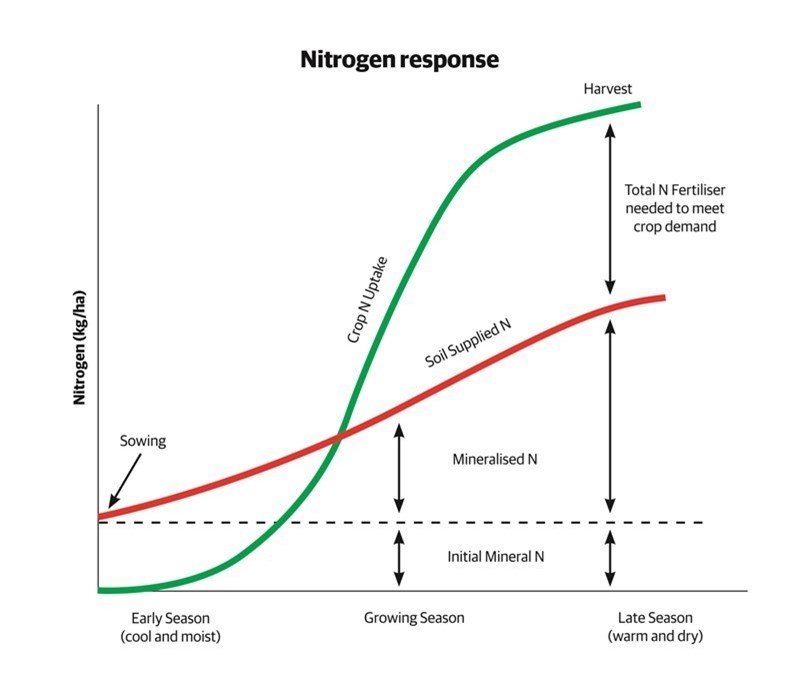 How does mineral N testing work?

The amount of N that mineralises under field conditions is not directly measurable.  However, it can be predicted from (1) a test of the soil’s N mineralisation potential (i.e. the amount released under “optimal” conditions in the laboratory), and (2) an understanding of how differences in soil temperature and water content during the growing season affect the rate of N mineralisation.

Laboratory tests can be used to estimate the potential of soil to mineralise N under specific conditions. The potentially mineralisable N (PMN) in soil is best measured using a long-term (14 week) aerobic incubation in the laboratory, but the procedure is laborious, time-consuming, and unsuited to routine commercial testing. Recent research has shown that soil hot water extractable organic N (HWEN), a rapid and precise test, provides a much better prediction of PMN than other measures of mineralisable N, including the anaerobically mineralisable N (AMN) test offered by most soil testing laboratories in New Zealand. The AMN test measures mineralisation under highly artificial conditions (high temperature, waterlogged soil) that are not applicable to field situations and the test has poor precision.

Ravensdown’s Nitrogen Mineralisation Calculator predicts the amount of N that will be released from soil organic matter over a typical spring/summer growing season at different locations across New Zealand. The site-specific prediction represents the cumulative amount of mineral N (kg N/ha) that will be supplied to a crop over a four-month period following soil sampling. It is important to recognise that the N is released gradually over that period and that the rate of release will be higher where the soils are warmer and wetter.

The calculator was developed based on generic soil descriptions and historic soil temperature and water content data for nine locations across New Zealand, representing different climatic zones in the major cropping regions. The N mineralisation calculator can be applied to cropping soils in other parts of the country where there is a reasonably close match between the soil type (soil order), temperature and rainfall at a soil test site and one of the nine original calculator calibration locations.  Overall, this encompasses the dominant climatic zones within the major cropping regions of New Zealand - Canterbury, Tasman/Marlborough, Manawatu-Whanganui, Hawke’s Bay, Gisborne, Waikato and Auckland.

The benefits of PMN test include

The PMN test is now available from main commercial laboratories, including ARL, for the springs growing season. Interested in finding out more about whether the PMN test is right for you? Get in touch with your local Ravensdown agri manager or call the customer centre on 0800 100 123 for more information. 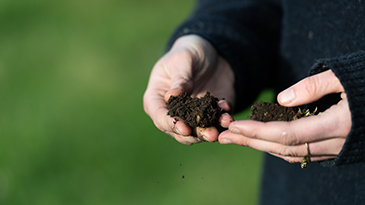 Is your aerial fertiliser application as precise as you think?