Summer cropping plans - what are your options?

As some pastures are nearing their end of life span, it’s time to put your summer cropping plan into action. Summer can be hard on your soil, and pastures, so the more lead-time you give yourself the better.

Lucerne is a high performing legume plant, due to its ability to utilise moisture better than other forage crop options. It can produce 12-20 tonnes of dry matter per hectare each year, dependening on soil conditions and management.

To maximise establishment, soil testing should have occurred in the autumn to allow time for any soil nutrients correction to be made. A free draining paddock (no risk of water logging), with a pH above 6.1 is a must, with enough area for rotational grazing.

Make sure you have good control of weeds prior to sowing, nutrient levels are at the optimum, and take some plant tissue tests once the crop has established to ensure the nutrient levels in the plant are also correct. Break crops are highly advised for both weed control and nutrient corrections.

Rape, is a good brassica option if you require a multi-graze option with limited summer moisture. Maturity of different rapes varies between 70-110 days, with there being giant and intermediate type rapes.

In good fertility soils, rape can produce eight tonnes or more of dry matter per hectare, and is generally sown at 3-4kg/ha. Insecticide application is generally advised from initial spray-out of the paddock, and during the early growing stages of the crop. Insecticides can be incorporated with herbicides if there are post emergence of weeds.

Nitrogen is generally applied post-emergence at 100kg/ha, but in some cases an application of DAP can be beneficial, particularly if your phosphorus levels are below optimum.

Clovers (legumes) are key drivers to animal performance because of their high feed quality. There are many different types of clovers (white, red, sub, annual, strawberry) to suite a range of different soil and management types.

Sowing rates differ between varieties due to size of the seed. For example, red clover is twice the size of white clover seed, and needs a higher sowing rate to get the same plant numbers. When sowing clovers into a pasture mix, be mindful that clovers take longer to emerge and mature. Clovers are also highly variable in yield and can be either used as a stand-alone crop or in a forage mix for a higher performing crop.

Aerial application of clovers with fertiliser is a very good option for increasing hill country production. The local environment will determine the species of clover, for example, if your summer rainfall is less than 700ml then sub clover is advised, if over 700ml white or red clover is recommended.

Due to the variability of New Zealand’s climate, no one size shoe that fits all, so contact your Ravensdown agronomist to tailor a plan that is right for your farm. 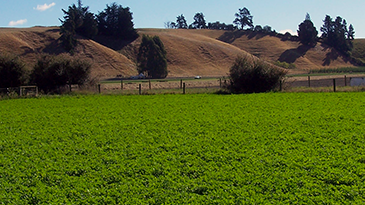 The environment we are facing

Getting the lay of the land

What is a Nutrient Budget and a PMP?