Super with nitrogen a proven performer

Superphosphate should be a firm favourite for farmers searching for greater flexibility from their annual fertiliser programme.

But it also offers the flexibility to be mixed with other products, particularly nitrogen (N) and potash (K), or trace elements.

“Certainly, super or potash super for dairy farms in Taranaki has always been the premium product for that situation – superphosphate in combination with potash does grow clover well."

He expects more farmers will return to superphosphate with limits like the N-190 cap to manage from the end of this season (2021-22) and the lack of flexibility from fixed-ratio products like di-ammonium phosphate (DAP).

“DAP is a good fertiliser, but if you're applying DAP for P and added K, then it can create a timing issue with the N component,” James says.

“Having N in the mix means you need to carefully consider timing of application to get the best response rate for pasture and minimise volatilisation. That requires some forethought in terms of weather conditions and soil temperatures.

“But by splitting the P, K and S applications away from the N applications, farmers get more flexibility to ensure they are using N in the most tactical way possible", James says.

“If you use a fertiliser like DAP, even at a 100kg/ha, you're applying 18 units of N, which is nearly 10% of your annual allocation. With super or potash super, adding Flexi-N at variable rates means that you can have as much N as you'd like from zero to whatever.”

When it comes to S it is important to compare the options accurately.

James says the S delivered in superphosphate is immediately available as sulphate-sulphur, important for boosting spring growth. In DAP, there's a tendency to use other slow-release forms of S.

“With potash super and Flexi-N, you can put on a light dressing of nitrogen and a useful dressing of the other nutrients just by varying the mix.”

Achieving acceptable accuracy when spreading is less challenging with potash super mixes than a high analysis fertiliser at lower rates of 100-150kg/ha over a large area.

For hill properties using aerial spreading, N on hill country is a double-edged sword. Unless it is managed correctly, it’s possible to lose pasture quality on big areas. DAP can be more effective for some farmers who aerial spread – it's got a good concentration of nutrients and has very homogeneous prills.

“In the situation where if you've got a long drive to an aerial bin, DAP has some advantages, especially if you want to add nitrogen to pastures. But equally, if you want to manipulate the amount of N you are putting on, or only put N on some blocks or areas, you can manage this easily with a super/Flexi-N mix.," says James.

“Once you're talking price, you’ve also got to talk value.

“While it’s largely dependent on the individual case, relativity wise, straight DAP might seem cheaper. However, once other nutrients or trace elements are blended into it, such as S, or even more N, then the price relativity changes quickly.

“My personal feeling is that for most farms, super mixes will always turn out to be very competitive.”

Easing back on the throttle

When dairy farming in South Taranaki’s summer-safe Awatuna district, it’s tempting to pump up the volume of N in the annual fertiliser mix.

It’s worked well in the past for Mike Grayling who owns two dairy farms mid-way between towering Mount Taranaki and the coastline.

But with one eye on the national N-cap of 190kg/ha/year, Mike is moving to a more tactical approach for applications of N combined with up to three dressings of 30% potassic super across each property.

“We're trying to plan a bit more with our N so we get good results out of it,” he says.

“This spring, I have put on less N anyway because we haven't been able to get around the paddocks with the tractor because it’s just too wet.”

He has also made the call to reduce cow numbers on his home farm this season to 580 after previously calving up to 630 cows each spring.

“We're probably looking at maybe going down to about 550 over the next two to three seasons,” he says.

“I just think when we are at over 600, there's a lot of planning involved and lots of supplement coming in. We just want to cut that down. I'm not getting any younger, so I just need to maybe be able to relax and maybe go back to more of a grass-based system,” Mike says.

Given the wet spring in 2021, he is also hoping the staged application of the potash super and nitrogen will reduce the risk of nutrient loss into waterways.

Despite a long-term investment in tile drainage over many years, the combination of above average spring rainfall, wind and cool temperatures have delivered sodden soils, pugging, pasture damage and slower growth.

“Compared to last spring (2020), which was a dream, this one has probably been a bit of a nightmare. As far as grass goes, we're in a reasonably good position, but it's been tough.”

The productive ash soils in this area have a hidden gift – lots of ironstone rock and logs which emerge when paddocks are cultivated for maize and re-grassing.

Mike grows about 10–14ha of maize each year, selecting his worst performing paddocks for two years of maize, then contouring before returning to pasture. Most of the property has been tile drained but there is ongoing maintenance and upgrades needed each year.

Each paddock going into maize is soil tested and existing drainage is checked to see it’s still working as intended. He will always retain some supplement in the cow diet and the feed pad also gives him scope to reduce the risk of pugging in wet conditions.

“We’re reasonably high input now but if we drop our cow numbers, we will drop supplement out of the system as well.”

“I probably would never go away from supplement completely because when we've had a wet spring like this, we can bring cows off pasture and put on the feed pad and feed them. So they're always getting fed. That option is quite important to me.”

Weather is the ultimate dictator of grazing management, but Mike’s plan is to graze paddocks down to a residual of 1,600–1,700kg DM/ha. In spring, the aim is a 28–32 day round.

“When we get a year like we've had, which is very wet, we're probably leaving the paddocks a little bit scruffy because we're trying not to do too much damage," Mike says.

“On days that we can, we do graze down to the residuals and we'll just have to tidy it up with a bit of topping later on.

“I've got 580 cows that are the best toppers on the farm, and that's their job.”

The property has averaged about 300,000kg MS/season for the past few years. This year, with 30 fewer cows in the herd, he’s hoping to still deliver a similar output but accepts the spring so far could mean it’s closer to 290,000kg MS.

Not far from the bush edge of Mount Taranaki, Wilson Gargan is locking in good results from a shift in fertiliser strategy on his 150ha dairy unit.

The property is farmed in partnership with his parents Robert and Coral and receives close to 3,000mm/year of rainfall.

Wilson calves 500 cows in spring and winters 400 on the platform while young stock are grown out on their calf rearing and beef unit nearby. He prefers a grass-based approach for feeding his cows, topped up with baleage and limited in-shed feeding of supplement.

When Wilson made the switch from DAP to 30% potash super and Flexi-N, he noticed an immediate improvement in pasture health and quality, particularly improved clover content.

“For quite a few years, we used DAP in spring but found that we got a massive bulk of grass coming through quite quickly, but then there wasn't a lot of growth afterwards,” he says.

“We were having to top up with a bit of N to keep things moving along.”

He says pasture production using the combination mix is steadier and more manageable. Being nearer the mountain, pasture growth through winter is often constrained by cold temperatures. But once spring hits, the farm is a reliable performer.

“We have a better growth for a longer period from the Flexi-N. That's all I need to use pretty much for the season.

“We're getting a lot more clover coming through. Better pasture health too. It doesn't yellow off like it used to and I just think the grass is healthier.”

The Gargans have two other farms in higher rainfall locations – another dairy farm and a calf-rearing and beef-finishing unit. Potash super and Flexi-N is the first choice there also. The rearing unit fertiliser is flown on and the rate of N is varied depending on the feed situation – easy to do with potash super and Flexi-N.

Wilson and Robert spread all their own fertiliser on the tractor country and say the difference in spreading cost for the combination mix compared with DAP is negligible for their situation.

Wilson always leaned on his Agri Manager James Livingston for advice on cropping options as well as fertiliser. After 15 years advising him, James knows the farm well and is often left on his own to collect soil test samples and check on crop or pasture growth.

"He knows the farm well," says Wilson. "So I can just let him go off and do what he needs to do. It saves me time which is great.” 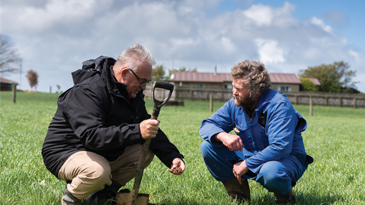 Help your clovers reach their potential