The Greensill Puniho Road Farm is a 90ha dairy farm, with 260 cows producing 450kg of milk solids on a pasture-only diet. Loren Greensill takes us through her approach to nutrient management.

As a pasture-focused operation in a part of the world with variable weather, we really need the control that comes with online ordering and record keeping. With fertiliser applications, we take a little-and-often approach. When you’re avoiding brought in supplements, you’ve got to be on the ball.

I juggle two jobs, so time is of the essence. We’ve got so much on the go. Farmers have better things to do than sit behind a computer and get swamped with paperwork!

Intensity is everything, we’re often caught moving mobs around so we can make use of every little bit of feed we have. We are an all-year-round operation calving three times a year so we do have to manage our feed deficits, especially for our winter milking herd from late autumn through till early spring.

Here in Taranaki, our regional council has not set out as many rules as some other regions. But it will come and, even before that, we want to be doing the right thing.

It’s great to cut out the paper and get control over our ordering and spreading. It’s about taking charge of your own data. HawkEye is a good way to record what’s happened and definitely reduces the chance of something going wrong.

We’re focusing on growing the best pasture we can, so we organise our herbage testing through ARL. From our herbage tests, we can calculate what the plants need and where. We have a store just down the road in Okato and we’ll order special mixes usually consisting of super, potash and Flexi-N. Urea is often used as a pasture promotion tool as and when required. Because pH can be an issue, we try to avoid DAP.

Down at the dairy shed or wherever you are, with the app, it’s just so easy to organise what’s needed. It’s then a matter of waiting for the right weather window so we can get out there and get the product on the ground.

It’s pretty self-explanatory. I’m self-taught on the tool and it’s got to the point where I can talk others through some of the menus and instructions. We operate multiple farms and blocks so different people can see different reports.

As a self-spreading operation, we have the GPS technology in the tractors and it will be nice to integrate that with HawkEye one day. The Feed Wedge is another feature in HawkEye which I am looking to utilise in the near future.

I’m all about the science and the data and having a tool like this means it’s a great way to make important decisions based on evidence.

The people who make up the support team behind the tool are really important. I’ve noticed the HawkEye support team seem to be a really helpful bunch. One time I had an issue about a half kilo being added to my trace elements, making for an uneven spread rate. I got in contact with the team and they agreed to round it down whilst taking note for further improvements/alterations to the programme. It’s a small thing that indicates a bigger commitment.

My Agri Manager Sarah Good is awesome. She helps me out with all kinds of questions and is really knowledgeable. Sarah has been out to visit a few times just to do a run down on various components of Hawkeye and help us to get set up with Hawkeye online ordering system, which can be done through the phone on the Hawkeye app or computer.

Whilst there are plenty of “traditional” farmers in Taranaki, habits and farming are changing and technology is playing an ever increasingly part of farming. As a farmer-owned co-operative, Ravensdown realises that, for people to adapt, it’s going to take time. The team at HawkEye have made it easy, kept it simple, given people choices and stayed patient. The rest is up to farmers to start using the tools that have been created for them.

HawkEye is a map-based software tool that helps farmers make better nutrient decisions, find out more about how HawkEye can help you by checking out their website. 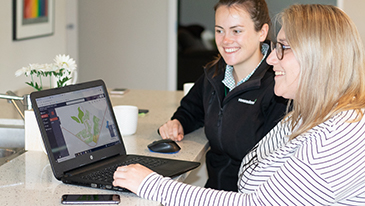