After a chequered past, a Hawke's Bay dairy farm is back in the green in more ways than one.

Ken and Karen McLanachan bought the Te Pohue Dairy at a mortgagee sale four years ago, and said the farm was run down to the bone.

“The farm had been overstocked, sapping it to the point where there was only old pasture, heaps of weeds, low soil fertility and bad animal health issues.”

The couple and their Sharemilker, Craig Davey, have spent the last four years working on improving the property which is now up 100,000kgs of milk solids since they arrived. Something they say they couldn’t have done without the help of Ron Burt, their Ravensdown Senior Agri Manager.

“Ron’s the most helpful guy I know. He can’t do enough for me and is always on the end of the phone if I need advice or help with anything,” Craig says “he’s great because he communicates between Ken and Karen and I and it makes things work really well. His advice is right up there and he’s a trusted member of the team.”

From the beginning the team set out to get the soil fertility back to optimum levels, get rid of the ragwort and thistles and re-grass the farm.

Using soil test results as their guide, they started out with a capital application of 2 tonnes of Aglime and a tonne of Superphosphate. Three years on they’re now only applying small amounts of Potash Super to the Non-Effluent areas with pH levels up from 5.3–6 to 5.7–6.2, Olsen P levels up from 8-31 to 18-41 and potash levels up form 2-6 to 7.

The ragwort and thistles that were reducing the farm’s productivity have now basically been eliminated “We used to have paddocks of yellow and you could see stripes where the choppers had missed, it was pretty bad, but after applying 1,000 litres of pasture guard 2,4-D yearly for the first 2 years we’re only spot spraying now, which is a welcome relief.”

With these two issues in check the ultimate goal is now to re-grass the whole farm at 10% a year. Ron says the cropping plan currently uses a summer crop of Marco turnips for the milking herd, which also helped with weed control, and in the autumn a high performance dairy mix is planted in the turnip paddocks.

“We’ve replaced 30% of the pasture so far,” Ken says “We’ve still got a way to go but it just looks heaps better than it did. The colour of the pasture looks like we could be in the Waikato! It is what makes all the difference between high producing cows and low producing cows.”

Ron adds “It was about 3 years ago I recommended putting together a cropping plan and wintering on farm. Back then all the cows were wintered off farm and it was costing them about $25 per head a week and they were losing condition. Now all the cows are wintered on farm, on silage and proteor kale and in those 3 years they’ve gone up 100,000kg/ms/yr, with cows coming back onto the milking platform with the same if not better condition score.”

After the kale has been eaten, the paddocks are then planted in blade Italian ryegrass which is used for silage and grass for younger replacements.

When it comes to the farm’s success, Craig says that between Ron, Ken Karen and himself they’ve all played a big part in getting the property where it is today. “It’s really important to have people on your team that are reliable, I’ve found Ravensdown to be just that. They have good products that are delivered directly to the farm, which is a big thing for me because we live so far out of town.”

Reliability being a key quality for Ken also “Ron has taken more of a long term policy when it comes to our working relationship. He’s really conscientious and has his finger on the pulse the whole time. He actually phoned me the other night to check that I’d done my homework on a seeding job because time was running out, which is great for me because I need chasing up as I can’t be everywhere at once.”

Looking ahead Craig says they’ll keep trying to re-grass 30 ha a year and after talking to Ron and Cropmark’s Agronomist Neville Atkins, they may look at using some chicory instead of the summer turnips, which is a slightly better quality for milking on. 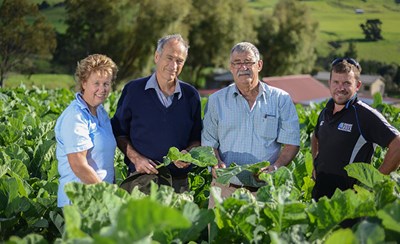 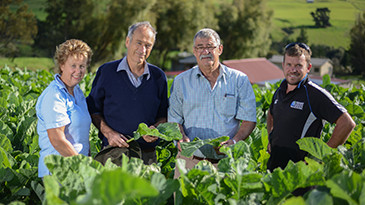 Published under Advice, Research and Innovation