Turnips a hit for farmer and stock

Finding the best system for each individual farm is an ongoing process, particularly at a time of tightening economic circumstances.

Often one change in the system can open up possibilities of other developments and in the case of one Waikato farm, a change in irrigation systems allowed for the introduction of cropping changes.

Brad Kilgour manages a fully-irrigated 75ha farm owned by his parents, Simon and Carol Kilgour, on Broadlands Road, Reporoa. He milks 240 cows and has produced an average of 120,000kg of milk solids during the past three years (more than 500kg/ms per cow).

The Kilgours, who buy their seeds, agrichemicals and fertiliser from Ravensdown, also utilised soil and pasture sample testing to support the changes to their farm systems.

Brad planted Marco turnips for the first time this year and they were such a hit that he intends doubling the amount planted next summer.

“It’s only a jump from two to four hectares,” Brad says. “However, the Marco turnips fitted in well with changes to our farm system and the cows loved it.”

This season the Kilgours converted two thirds of the farm to centre pivot irrigators from a Bosch long lateral system. This allowed them to introduce some walk-over-the-top cropping to the pasture renewal programme, including the Marco turnips and whole crop cereal silage.

The paddock concerned was back in permanent pasture before winter.

The barley was planted at Labour Weekend and harvested at the end of January. The Marco turnips were planted in the same paddock at the start of February.

“Due to the turnips’ short maturity, 60 days, we were able to feed it out for three weeks from early April, which helped us to slow our grass rotation down,” Brad says. “A key part of that was being able to irrigate through February to get the crop established.”

Ravensdown Agronomist, James Bryan, measured the crop to have a 10-tonne yield in those 60 days, which worked out to be a 160 kg/DM per day growth rate.

“Grass under water in that time would probably grow only 80kg/dm in that period. The turnips proved to be a good, cheap feed per kilogram and the cows loved them,” says Brad. “Our cows had never seen turnips before because we’ve never cropped. It only took a couple of days and they were cleaning the breaks up really well.”

Being a tetraploid turnip, the Marco variety lends itself to being highly palatable, and this proved to be the case he says. 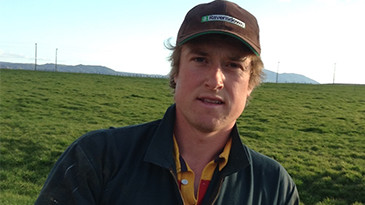