Finding a way to reduce agricultural emissions while feeding a growing population takes innovation. Using alternatives to traditional cultivation methods, such as strip-tillage, is one way farmers can reduce their carbon footprint without compromising yields.

On farmer Richard Peckitt’s arable operation in South Canterbury, soil conservation comes first. Using a combination of crop rotations and specialised machinery for minimal soil disturbance, he aims to keep organic matter levels high and environmental impacts low. Richard farms 540ha in the Levels Valley near Pleasant Point through a combination of ownership, leasing and share-farming. To plant his crops, he uses a Mzuri strip-till, which he imported from the UK in 2017.

Strip-till is a minimum tillage method where sub-soil legs work the soil to prepare a seed row. Lead tines on the machine cultivate rows of about 20-25cms, while seed and fertiliser are deposited from a hopper at the rear.

Strip-till machines help cut fossil fuel emissions through reduced passes and limit the emissions associated with soil disturbance. On the back of this, yields are increased through improved soil structure and increased soil organic matter. The sub-soiling legs allow free movement of the roots, while the system encourages water to move up and down the soil profile. Strip-till also allows nutrients to be placed in the seed zone, improving the efficiency of resources.

Richard has used direct drilling solidly for 16 years, after he saw the damage happening to the soils following a weather bomb in 2000.

We had 163mm of rain in 50 hours,” he says. “Long story short, the cattle pugged the fence line and at harvest time I could see [the yield drop] where every fence line had been from the combine [harvester]. “That was really what drove me into direct drilling. We had also lost soil from a worked paddock, and I thought to myself, ‘we just can’t farm like this’.”

It all comes back to your environmental footprint and only applying as needed.

Richard grows milling wheat, feed barley, peas and oilseed rape, and is trialling areas of hemp and sunflowers. Oilseed rape is the main break crop grown on contract for premium food-oil producer Pure Oil. Richard says the market for New Zealand-produced rapeseed oil is growing – this season he will grow 120ha, which will be delivered to Pure Oil’s crushing plant in Rolleston.

“The oilseed rape yielded quite well last year with a 4.5t/ha average across 90ha, so that was very pleasing,” Richard says. “It peaked out at nearly 6t/ha in some areas and was our best crop by far.”

Richard uses yield mapping on the combine, along with gut feeling, to decide which paddocks to soil test. With the strip-till method, fertiliser is applied with the seed at sowing.

“We put DAP near the seed and nothing else till spring, rather than putting it on in autumn and watching it flood out of the paddock [over winter],” he says. “It all comes back to your environmental footprint and only applying as needed.”

“In the past Richard would have applied over 250kg N/ha,” says Chris. “Now we are applying between 150-200kg N/ha because of a better understanding of crop architecture and canopy management. This will only improve in the future with digital applications.”

Sulphur (S) is also key in producing a quality oil. “Pure Oil are noticing the colour of the oil is better – you get a better quality oil if the sulphur levels are good,” says Richard.

He is very conscious of potash removal and will only sell straw if he can guarantee above-replacement value. “We try not to burn, and only sell wheat straw if we can get the right money. We did end up burning some [paddocks] but long term, you don’t want to rely on it.”

He’s also reluctant to address the challenges posed by aphids and slugs with chemicals; instead he’s looking to establish a spring-sown break crop, which may then provide an opportunity to establish a cover crop such as ryegrass or crimson clover to take up N and improve soil structure. “I had to burn a few paddocks last year and noticed less slug and aphid damage in those… but I don’t want to go back to burning, which is why we’ll look at break crops and change things up in a different way.”

Richard says it wasn’t a conscious decision to go towards producing more niche crops such as oilseed rape, but more a natural progression to answer evolving consumer demands. The change happened when he became a shareholder and supplier of milling wheat to Farmers Mill in Timaru, which manufactures and markets high-quality flour and specialty grains grown in South Canterbury.

“I had always considered myself a broad-acre commodities producer,” he says. “I grew up in a system in the UK where you just produced, and you had people coming through your door wanting to buy your product. Without realising it, we’ve gone into more niche products with a secure marketing line.

“It certainly makes it more interesting with growing what we’re growing. Rather than just putting it on the truck and sending it out the gate we get feedback from the mill, and we get an insight into what they are doing and where it’s going,” Richard says. 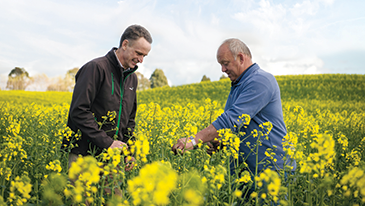