Our Land and Water scientists’ modelling of on-farm mitigation actions shows that if all mitigation techniques are adopted, most catchments will meet current water quality objectives by 2035.

A nationwide assessment measuring the impact of improved farming practices (on-farm mitigation actions) on waterways shows that by 2035 most catchments will meet their water quality objectives if farms continue adopting practices known to protect waterways.

The projections were made by modelling current environmental farming practices, implemented between 1995 and 2015. It revealed that significantly more nitrogen (45% more) and phosphorus (98% more) would have entered rivers from dairy farms if farmers hadn’t adopted new practices to shield rivers from harm.

While the mitigations were not sufficient to offset the increased nitrogen loads brought about by the expansion of dairy (land-use expansion of 40% and a production increase of around 160%), or sheep and beef (beef farming area contracted but production per hectare increased), it did save us from a much worse fate. The scientists’ conclusion is that accelerating the adoption of these mitigation actions that are already proving effective will lead to significant further improvement in water quality.

Modelling shows that if all known and developing mitigation actions were implemented by all dairy and sheep and beef farmers by 2035, the potential load of contaminant entering rivers would decrease by 34% (nitrogen), 36% (phosphorus) and 66% (sediment).

The most effective nitrogen and phosphorus mitigation practices both on dairy-farmed land and sheep and beef are:

We know these mitigation techniques work because the researchers were able to combine the data from geographic and mitigation efficacies for about 130 farm typologies in 2015 and compare it to potential contaminant loads in the following scenarios. 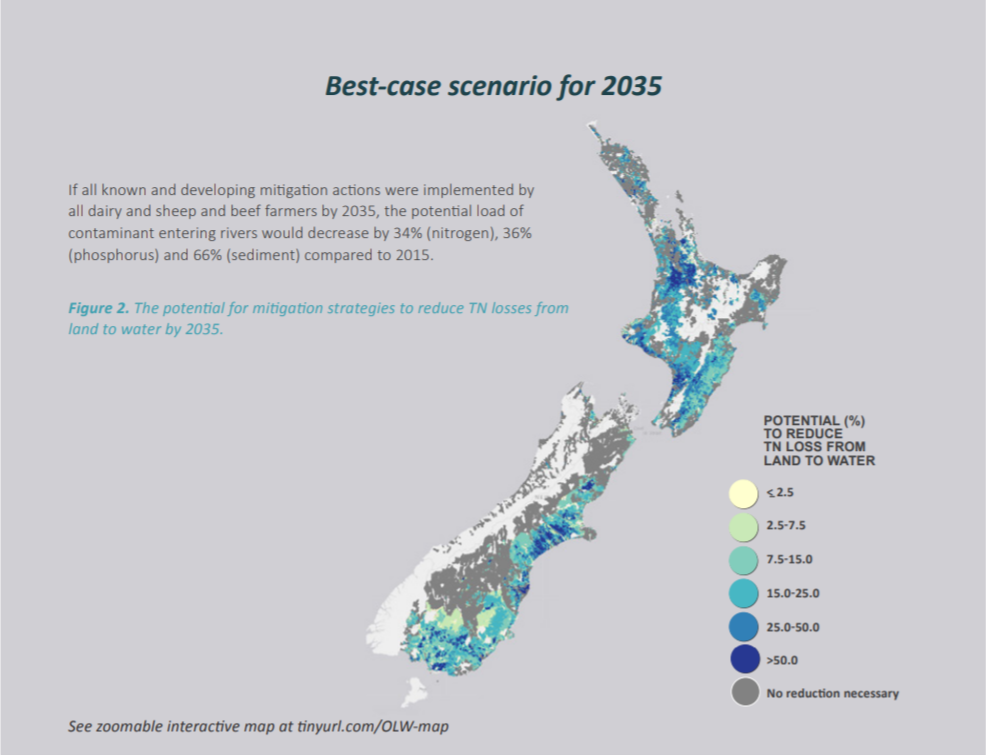 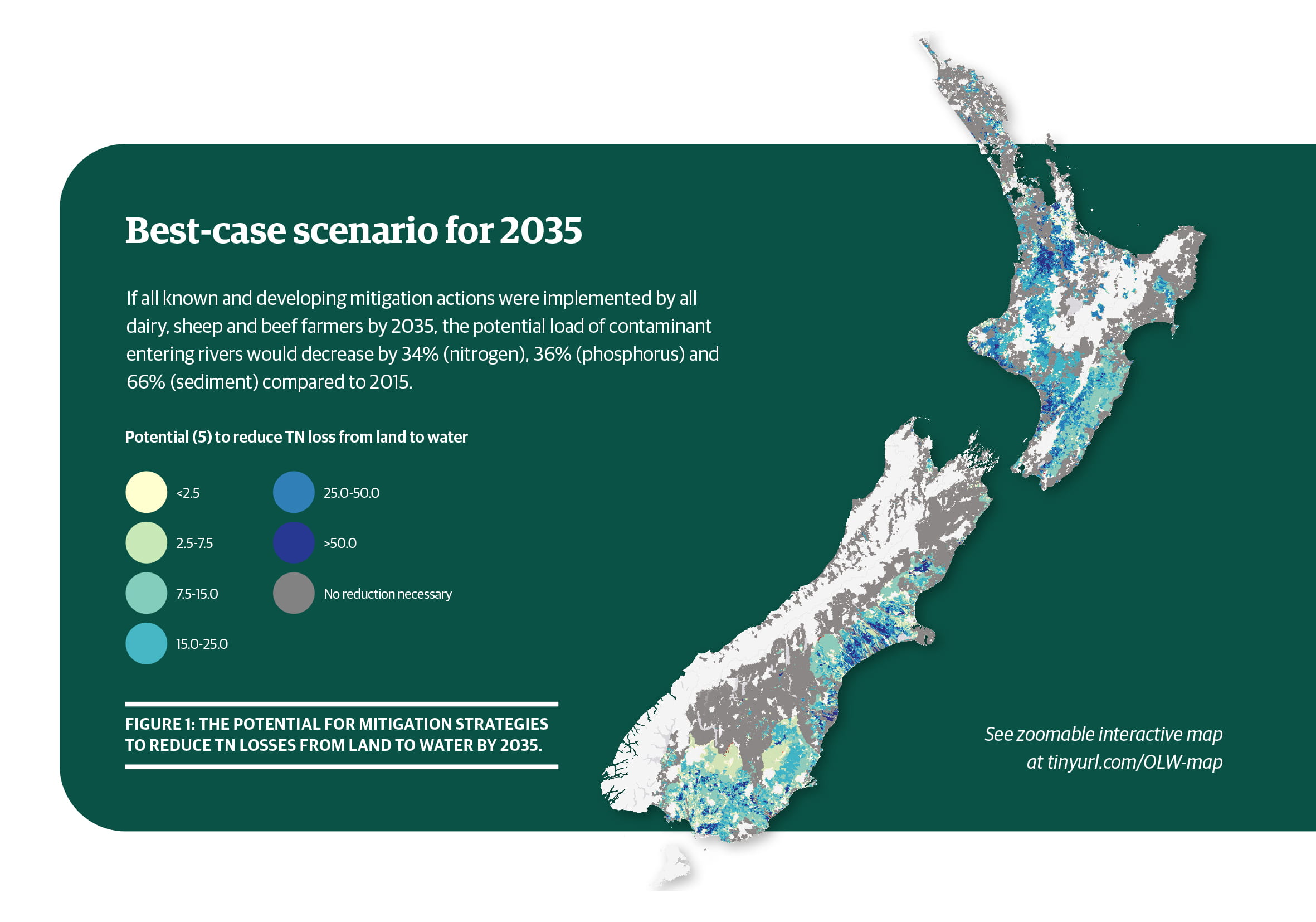 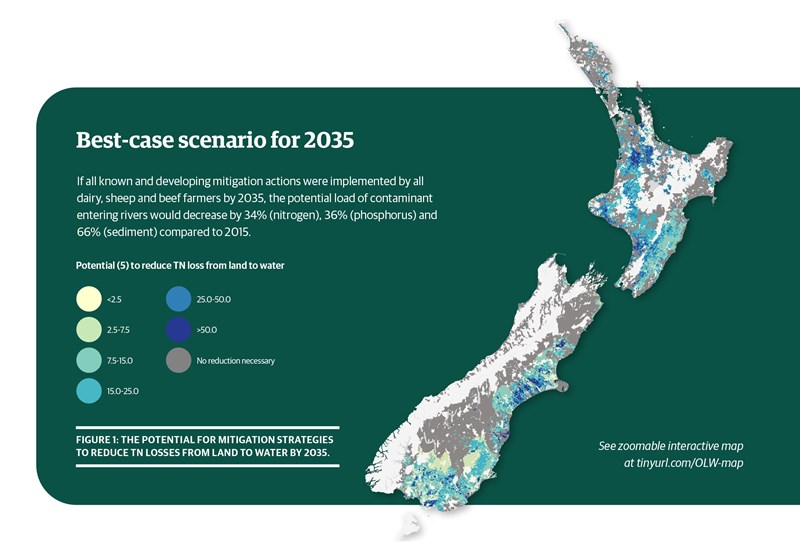 What does this mean for the future?

Researchers estimated that, compared to 2015, if all known and developing mitigation actions were implemented, the potential loads of nitrogen and phosphorus entering rivers from dairy and sheep and beef farms could decrease by one third, and sediment by two thirds by 2035.

The research assumes that actions are implemented 100%, which is often not the case. In addition, for some catchments and farms, applying all known and emerging mitigations may be less pragmatic than some change in land use or land-use intensity.

Existing catchment management groups have helped farmers and others take collective responsibility to try to achieve desired water quality outcomes. With further leadership and engagement, this approach could evolve into a more accountable, innovative and effective vehicle for advancing environmentally sustainable agriculture.

This, along with more effective support for catchment collectives, will hopefully see more farmers and catchment groups learning from each other and instil confidence to act. 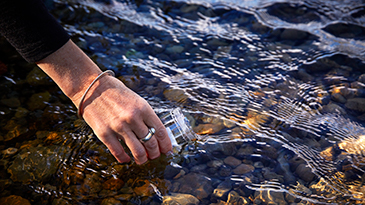