The animal vs plant debate heats up as a meat-free diet is pitched as a key climate solution. We get the perspectives of two European food and social scientists, Frederic Leroy (Belgium) and Martin Cohen (UK).

The ‘narrative’ of the animal versus plant debate has grown so strong that those still questioning the principle risk being labeled ‘climate deniers’, conspiracy theorists, and egoists – all on the wrong side of history.

While our enemy (CO2) is out there terrorising the atmosphere, it resides within each of us. Because every single one of our activities generates the dreaded gas, every breath we take adds to the problem.

So, let us prepare for a new age of carbon-neutral. On the way, there will be many temptations: building a house (and heating it), driving a car, buying clothes and washing them, using a smart phone, keeping pets, and – horror! – having children. For many, it may seem too much to give up.

And perhaps it’s as well then, for an anxious world, that a scapegoat appears... LIVESTOCK! An excellent choice, as this has not only been its historical role, it is also a very convenient option. Not sugar, nor refined starches and seed oils, far fewer doughnuts or nuggets, but animals have been chosen as the chief sacrifice of the Great Food Transformation. Regardless of the fact that animal foods were part of our evolutionary diets or the shaky nutritional science behind their demonisation, the flocks and fowls are now said to cause chronic disease and are destroying the planet. Haven’t you heard that cows are worse than cars? Has not an Oxford academic said that eating a vegan diet is the “single biggest way” to reduce our environmental impact? Hasn’t a learned Harvard professor calculated that up to a third of early deaths could be prevented by everyone giving up meat?

Indeed, as a ‘leading member’ of the so-called EAT-Lancet ‘Commission’, this same professor has also designated a Planetary Health Diet that stipulates a daily ration of red meat ranging from a maximum of 14 grams to a virtuous ideal of zero. Impossible? Unrealistic? Yet haven’t the venerable universities of Cambridge and Coimbra banned red meat from their menus? Haven’t the United Nations awarded "Champions of the Earth" status to two companies that not only produce vegan burgers but have adopted a mission to eliminate the need for livestock. Truly, animal foods must be evil, if ultra-processed foods like these are to be preferred.

To the point then

With so much authority behind this push to plant-based eating, the expected benefit must be huge, mustn’t it? Yet, if a Westerner did decide to become vegetarian, his or her footprint would only decrease by 2-4%. That’s something, but not much. Moreover, even this shift comes with trade-offs, it will include consequences that could potentially be troublesome on a nutritional level. Put another way, if the entire United States went livestock-free, and if the complex changes in land use really did work out as speculated, that would decrease emissions by 2.6%, while also causing a deficiency in essential nutrients. Is the price worth it?

Added to which, all this detracts from the critical issue of burning fossil fuels. Let’s be clear: yes, we do have a global responsibility to provide sustainable diets to future generations. Yes, we are facing a planetary crisis. And, no, not all is well with animal agriculture in its present form. But the same can be said about plant agriculture. For example, trendy avocados that drain the water supplies of villages in Chile and cashew nuts that leave Indian women with acid burns. Think of palm oil and almonds, or the greenhouse apocalypse in Almeria.

If done well, plant and animal agriculture can be sustainable, regenerating the world’s soils while providing the global population with quality nutrition. But this is not about enough food quantity or about calories, or even protein, but about essential amino acids, vitamins and minerals. All too often, environmental comparisons are calculated per gram or per kilocalorie instead of per unit of true nutrition.

Giving up on livestock would deprive us of a range of exceptionally nutrient-dense foods and undermine our hopes for sustainable crop production. Not to mention livestock’s many other benefits. As the UN Food and Agriculture Organisation has pointed out, animal agriculture is perfectly compatible with sustainable development. Animals provide livelihoods, ecosystem services, manure, traction, use marginal land where crops can’t thrive, and build topsoil. They may today be identified as the problem by think tanks and elites but, as Ethiopia’s Minister of Agriculture wrote recently, they should be part of the solution instead.

Yes, there is work to be done to make animal agriculture truly sustainable, but it needs to be done through sound reform rather than the hubris of radical revolution. What is needed is a reconnection to traditional, holistic views on food systems updated with the best of science. What we don’t need is media-spun quick fixes and high-tech fantasy. Systemic change is required, but a breakthrough will never be achieved by placing the guilt and shame on the shoulders of individuals. Nor, indeed, on the weary shoulders of our animal companions for that matter. 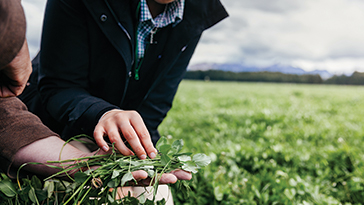