Ravensdown’s popular development programme has returned for its sixth year, this time supporting six talented university graduates into fulltime careers within the co-operative.

Among those are two former recipients of the Ravensdown Hugh Williams Memorial scholarship; 2019 winner Tom Wilson and 2016 winner Lucy Bell.

Tom Wilson, who completed a Bachelor of Agriculture Science from Massey University last year, said he hopes to land an agri-manager role from his time in the programme.

“I’ve come away from my degree incredibly passionate about precision agriculture and believe it could truly be the answer to some of the greatest challenges facing the world right now.

“But before I head down that path, I want to get stuck into the practical side of farming. I think an agri manager position would be the perfect way to do so.”

Lucy Bell completed a Bachelor of Agricultural Science (Hons) at Lincoln University last year. Coming away from that with a passion in soil and plant science, Lucy said she was thrilled to be continuing her involvement with the smarter farming co-operative.

“Winning the scholarship early in my degree was great as it gave me the chance to learn about the culture within Ravensdown and form connections with some of its people.

“I was over the moon to be accepted into this year’s first intake and to continue being part of a business that’s so aligned with my own values and beliefs. Over the next few months, I’m going to make the most out of the opportunities and learn as much as I can before looking to head into a full-time agri manager position.”

Throughout the minimum six-month programme, participants will be involved in all aspects of the co-operative’s business.

“The programme is a fantastic way for agri-graduates to start their careers in a sector they are truly passionate about, says Ravensdown Training Manager and Mentor Gordon McCormick.

“They will be running the show in the years to come, so it’s important we give them a good grounding and a chance to find out what part of the industry their skills and interests are best suited to.” 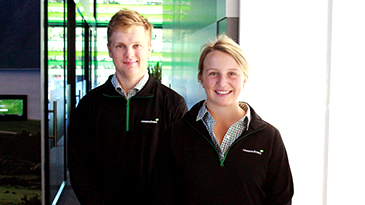 4 December 2019
Back to In the Community