Continued financial strength and a focus on a consistent strategy saw the co-operative deliver a total rebate of $47 per tonne and post a 2017/18 profit before tax of $63 million– a 24% increase on last year.

A shareholder buying 100 tonnes of solid fertiliser in all of the past three years would have seen their total rebate add up to $13,300. The value of the business has also increased $50 million in that time with equity rising from $379 million to $429 million.

The result was not a one-off and not just about the financial indicators according to John Henderson, Ravensdown’s Chair. “The key thing is everything we’ve been focusing on and investing in for the last four years has been delivering returns for shareholders and building the value of the company along the way,” said John.

While this is a very strong financial result, Ravensdown is not here to maximise profit at the expense of our natural environment, safety or our local communities. Returns for shareholders take many forms including new products, expertise and technology that help them reduce environmental impact and optimise value from the land.

“Continued financial strength gave us the confidence to pay an interim cash rebate for the third year in a row and reinvest in the business in order to support our smarter farming purpose,” added John.
Rebates are paid to shareholders who bought solid fertiliser products between 1 June and 31 May each year. For those who bought solid fertiliser before 31 May 2018, $17.50 of the total rebate has been in shareholders’ bank accounts since 8 June. For fully paid-up shareholders, the remaining $29.50 per tonne will be paid in cash by the end of August.

An operating cashflow of $98m ($60m 2017) and balance sheet strength allowed the co-operative to invest in the business. Chief Executive Greg Campbell said he was excited about developments in the environmental space. “We are determined to help - and uniquely capable of helping - farmers manage their nutrients and encourage good farming practice. Our aim is to help others reduce their environmental impact so we must lower our own. Being welcomed into the Sustainable Business Council, joining the Climate Leaders Coalition and reporting our carbon emissions for the first time is just the beginning.”

“Society is rightly expecting more and we are expecting more of ourselves,” added Greg. The co-operative pumped more funding into Research and Development than ever before. Ravensdown introduced a new ClearTech effluent treatment system that has the potential to reduce the dairy sector’s fresh water use by 42 billion litres. It continued to build the country’s largest farm environmental consultancy, develop the largest team of certified nutrient management advisors in New Zealand and deployed HawkEye mapping software that helps farmers see and show how they are complying with environmental requirements.

Ravensdown spent $8.7m on finishing a new New Plymouth store, $5.3m on new loaders throughout stores and manufacturing, $2m on its continuing asbestos removal programme and $2.3m on health and safety such as guarding and covers.

Ravensdown’s Primary Growth Partnership programme, which is investigating improved aerial spreading precision, is at the three-quarter mark on its seven-year journey. Of the farms using the service so far, 14% of land on was excluded from application because it was ineffective, culturally sensitive or environmentally vulnerable. Avoiding this land in a way that is safer for pilots is a win-win for productivity and the environment.

The Ministry for Primary Industries strongly endorsed the programme by agreeing to extend its coverage to potentially 90% of hill country which in future could be soil tested from aircraft.
“I’m proud of Ravensdown’s contribution to premium food creation in New Zealand, the way we are preparing for the future and the efforts of all the team to deliver another great result,” Greg said. 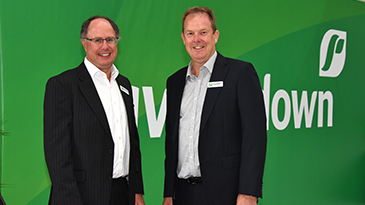