Dr Venter was originally a chemist who made the jump into agriculture and has never looked back. He says farming in South Africa is very different to New Zealand.

“Intensification in South Africa is not such an issue because of the low yield potential – an economically viable maize farm would be about 2,000 hectares.”

The bigger issue is lost production due to adverse weather events which can claim up to 25 percent of annual production.

“Although farming systems are different, I’m struck by how similar farmers are the world over,” Dr Venter says. “You could put a group of farmers from different countries together and soon be talking about the same issues. They tend to be passionate about their natural resources, try to manage in the face of uncertainty and will take advice from professionals if it is based on sound scientific evidence.”

Before Dr Venter moved to New Zealand more than a decade ago, he was a chief researcher at South Africa’s Agricultural Research Council. He spent 19 years preparing research papers, marketing technical services, leading teams of agronomists and providing plant nutrition and crop management advice for a contracting company.

He has a PhD in Organic Chemistry and a PhD in Soil Science from South Africa, but was never interested in the purely academic life.

The modern farming role has changed in the past 20 years, he says.

“If you put the kind of skills needed to be a farmer in New Zealand these days into a job ad, it would be interesting to see how many could even get an interview,” he says.

“They are called upon to be business managers, practical problem solvers and great communicators. They have to be physically capable, good with machinery and people while having a scientific mindset.”

As a subsidiary of farmer-owned co-operative Ravensdown, ARL carries out about 70,000 soil tests a year.

“Other labs stop at the report-generating phase. But because Ravensdown has a direct relationship between its field-based team and its customers, we can go on to make recommendations that will have a real impact on the farm’s outcomes. As a trained agronomist, that is very satisfying and unique in my experience,” Dr Venter says.

He says farming is cyclical, but the demand for accurate test results on which to make good decisions is only going to increase. ARL’s role is to ensure a quick turnaround time and accurate analytical results.

Although concerned about the declining number of agricultural research junior scientists coming up through the ranks in New Zealand, Dr Venter is excited by initiatives such as Ravensdown’s Primary Growth Partnership on more precise aerial spreading.

By using remote sensing of soil nutrient status, we can obtain a bird’s eye view of the farm and ensure accurate placement of nutrients, improving productivity, reducing costs and minimising environmental impact,” he says.

He also finds the untapped potential for whole-farm testing to be intriguing.

“A recent paper at the Fertiliser Lime and Research Centre discussed how more intensive testing of farms can have a huge effect on optimising soil fertility levels through paddock-specific fertiliser applications,” Dr Venter says. “This is a way of ensuring fertiliser dollars are invested where they are needed and is an approach we’ll keep exploring." 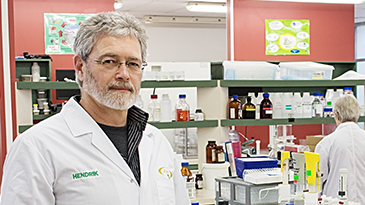