Building lasting relationships and the farming lifestyle are two of the big reasons Reuben Connolly wants to stay in the farming sector.

Reuben and wife Deb came second in last year’s national Dairy Industry Awards Share Farmer of the Year, after winning in Waikato. Reuben is a first-time entrant in this year’s FMG Young Farmer of the Year. He joined Te Kawa West Young Farmers and won the Piarere District Final, and will compete in the Waikato/Bay of Plenty Regional Final in Te Awamutu to earn a place in July’s Grand Final in Whangarei.  It’s his first and final chance as he’s nearing the 31-year age limit.

“I've thought about the Young Farmer of the Year for quite a few years but never actually got around to doing it. Now this is my last opportunity so I will give it my best.”

Reuben and Deb lease his family’s dry stock farm, and have been 50/50 sharemilking and in a 20% equity partnership in a 110ha, 280-cow dairy farm near Otorohanga for the past five seasons. The couple rear and graze their own young stock, plus 700 sheep and a small Hereford stud. Reuben grew up farming sheep and beef and worked for six years as a block manager in the dry stock industry after leaving school, before going sharemilking near Cambridge. Deb grew up on a dairy farm in Ohaupo and holds a Bachelor of Teaching (ECCE) from Waikato University. The couple have four children – Laura, 7, Vanessa, 5, Zoe, 4, and Isla, 2 – and a fifth due in June.

He says they’ve been busy on farm and with the young family; add the Dairy Industry Awards and the Young Farmer of the Year, then throw in Covid-19 as well, and things are “controlled chaos,” he jokes. “If we do something, we'd like to do it well. We're certainly busy with farms and family and bits and pieces, but it’s about giving everything a go.”

Reuben says entering the awards is like continuous improvement. The couple told the DIA judges that sharemilking with little prior dairy knowledge had been a huge challenge, overcome with advice from other farmers, DairyNZ discussion groups and industry professionals.

One such industry professional is the couple’s Ravensdown Agri Manager, Te Awamutu-based Brenna Coleman, who they met through the Dairy Industry Awards (DIA). Soon after, they became a Ravensdown customer and then a shareholder.

“She is reliable, knowledgeable and easy to get along with,” Reuben says. “We had been with another firm, but are grateful for Ravensdown’s and Brenna’s support of the industry and of us,” he says. Ravensdown sponsor both the DIA and the Young Farmer of the Year.

He has also learnt a lot from his parents, Brian and Bev.

“I obviously look up to them and see all the hard work they did before us.”

Future farming goals for Reuben and Deb include farm ownership. Reuben says he went dairy farming because of the apparent lack of progression in the dry stock sector.

“There’s no real ladder to climb. You're either working, managing or the owner. We saw the dairy industry as more of a way to get ahead. So we gave it a go, and the rest is history. If you want to be a dry stock farmer, you have to find a way of getting there. We went for dairy and it worked for us, but whatever you decide, you have to be prepared to work hard and adapt to change.

“You can't go past being an honest, hardworking person; you can learn the rest.” 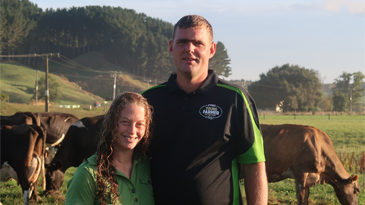 Just give it a go