Greg Campbell, Chief Executive of Ravensdown has notified the Board that he will be leaving the role and has started his six-month notice period. This gives the Board time to search for a suitable replacement for Greg who has been CEO of the farmer-owned co-operative for eight years.

Greg explained that the time felt right to move on, but there was no specific role lined up. “I’m a director on several boards and that seems enough at this point. I’ve been a CEO for different organisations now continuously for over two decades so it will be good to pause, take stock and see what life holds in store.”

His pride in the Ravensdown team and all it has accomplished – especially coming through for the country as an essential service during Covid-19 – is undimmed. “I’ll be leaving a co-operative that is in good heart and in a strong position to help shareholders with their goals relating to food production and environmental impact.”

Chair John Henderson will be leading the Board’s selection committee as Greg is scheduled to work until the end of May which is the current financial year. “Greg’s accomplishments have been exceptional and, on behalf of all stakeholders, I want to thank him for his leadership.”

The co-operative has had a strong first-half to its financial year added John. “We will now follow the process to ensure a smooth transition and appreciate the staff and management’s efforts as we select an appropriate successor.”

Greg Campbell joined the Ravensdown family in 2012 and his concern for people and their safety was plain to see from day one. In the early years, he was instrumental in the co-operative exiting Australia, focusing on the financial fundamentals and becoming even more science led.

In the first year, he initiated the setting up of what was to become the largest farm environmental consultancy in New Zealand. This was in anticipation of possible regulations and in response to shareholder feedback that farmers needed help mitigating their impacts not just growing as much as possible.

His consistent message over the years was that the farmer-owned co-operative needed to be selling the right amount of fertiliser, not the most. He encouraged greater nutrient use efficiency so that the expense and potential environmental impact of essential nutrients were optimised.

The ClearTech effluent management system, which has the potential to transform a dairy farm’s freshwater use, was launched in 2018. Responding to the importance of climate change, he led the way on sustainability by being one of the only agsector founding signatories to the Climate Leaders Coalition also in 2018.

The purpose of the business changed under his watch – moving from providing essential inputs at lowest cost – to enabling smarter farming for a better New Zealand. He led the move towards more transparent ‘Integrated Reporting’ so that progress and obstacles were realistically assessed and stakeholder engagement was prioritised.

Across the eight years, Greg led the co-operative’s transformation from a predominantly “fert company” to being seen as the “farm nutrient and environmental experts”. His was a consistent and simple message: that food needs nutrients, our environment needs better nutrient management and Ravensdown is strongly placed to help with both these challenges.

In his eight years, Greg Campbell has overseen the following:

Knowing that a resilient business can cope with incidents, he provided leadership at critical moments such as the Christchurch site’s fire of 2018 which was hailed as a case study in crisis management.

He helped the company navigate the trend towards more precision blending and diagnosis and greater use of technology. The HawkEye mapping tool will now help farmers with their nutrient planning and compliance needs.

Staff were left in no doubt how important health and safety was to him and more recently he has been embedding the broader concept of wellbeing into that safety culture.

Relationships with overseas supply partners built across eight years of listening and sustained networking has been repaid in the dependable availability and quality of the nutrients needed by the food creators of New Zealand.

He met with customers, ministers, critics, union leaders and activists – always believing it was better to engage and listen to stakeholders than adopt a bunker mentality.

Greg was instrumental in setting up the Ravensdown Agricultural Communicator of the Year Award. In addition to the New Zealand Dairy Industry Awards and FMG Young Farmer of the Year, the Agri Women’s Development Trust was added to Ravensdown’s major sponsorships.

His efforts were recognised by the agsector when he was named Primary Industries New Zealand’s inaugural CEO of the Year in 2019.

All the team effort in building a more resilient business culminated in the co-operative’s response to Covid-19.  Nutrient supply to keep soil fertility optimised and food for people and livestock growing was deemed an essential service during lockdown.  A record number of calls to the Customer Centre combined with continuity of service throughout frontline operations added up to minimum disruption.

His hallmark was communicating openly, positively and with humility. He led a team that remained responsive as massive pandemic-related uncertainty shifted and changed. As they adjusted to remote working and continuing operations, Ravensdown people felt connected and cared for.

The responsiveness and resilience demonstrated had been eight years in the making. 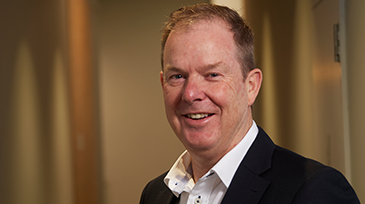